Where is Indonesia located on the map? Indonesia is an independent nation located in Southeastern Asia. Check out the following images to see location of Indonesia on maps. 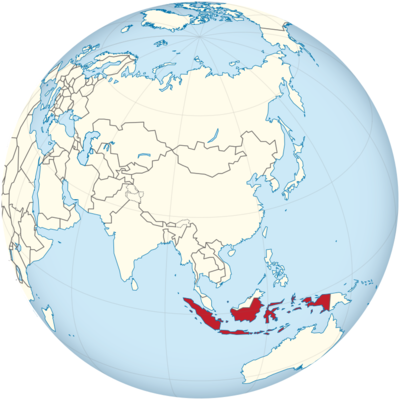 Indonesia is a country made up of more than 17,000 islands. The name comes from the Greek, in which the root word Indo, which stands for India, is connected with the Greek word nesos, which means “island”. Indonesia is made up of islands that are among the largest on earth. These islands are located between the Indian and Pacific Oceans.

Around a third of the Indonesian islands are inhabited, with people living on 6044 islands. The most important islands are Sumatra, Java, Borneo, Sulawesi and New Guinea. The island of Borneo shares Indonesia with Malaysia. Indonesia borders a total of three countries, namely East Timor, Malaysia and Papua New Guinea. It stretches between the two continents of Asia and Australia.

Indonesia is made up of numerous islands, and many of them are so small that you can’t even see them on a map.

Indonesia owes its diversity above all to its many islands. Some of the islands have their own cultures that differ completely from those known for Indonesia. As you may have already read here, Indonesia is made up of around 17,000 islands. Many of them are not even named. A few well-known and quite large islands are described here:

Many people who visit Bali see it as a dream island. There are beautiful sandy beaches that invite you to swim. The capital of Bali is called Denpasar. In Bali you can communicate very well in English. There are many temples to visit. But also the nature of Bali always pulls people under its spell.

Borneo is one of the largest islands in the world and covers an area of ​​743,000 square kilometers. There are three states in Borneo: In the north are the two Malay provinces of Sabah and Sarawak and the Sultanate of Brunei. Most of it belongs to Indonesia. The island is dominated by the mangrove swamps on the coast. By the way, there is a species of elephant in Borneo that has only recently been discovered, it is a small elephant, the Borneo dwarf elephant. There are only a few specimens left of this that one now wants to protect. Orangutans, the well-known great apes with their reddish fur, also live on Borneo. You can find out more about this under “Animals and Plants” of Indonesia.

Indonesia’s capital Jakarta is on Java. In addition, the famous and most active volcano Bromo is located on Java. The island is very densely populated, which is why many animals have unfortunately been displaced. The Java tiger became extinct around 1980 and other animals typical of Java such as the Java rhinoceros are threatened by this fate.

New Guinea is the second largest island in the world and covers an area of ​​771,900 square kilometers. 421,981 square kilometers belong to the Indonesian province of Papua and the rest of the island to the country of Papua New Guinea. Many endemic species live here. These are species that are only found there and nowhere else in the world.

Sumatra is the sixth largest island in the world and covers an area of ​​443,550 square kilometers. There are many volcanoes on the island and some of them are well over 3000 meters high. Many rainforests and diverse nature thrive. Indigenous peoples with their own language and culture still live in the forests. In Sumatra there is also Lake Toba, the largest crater lake in the world. Lake Toba was created by a massive volcanic eruption around 75,000 years ago. The landscape on Sumatra is beautiful and offers mountains as well as many lakes and wonderful beaches.

The largest of the many Indonesian lakes is called Danube Toba, also called “Lake Toba”. This is the largest lake in all of Southeast Asia. There are many volcanoes in Indonesia, including volcanoes that are still active today. 70 of the Indonesian volcanoes should be able to erupt at any time. The capital of Indonesia is called Jakarta and is located on the island of Java. The important trade route from Malacca runs in the north of Indonesia.

The climate in Indonesia is tropical and humid, so that it can even be 25 degrees Celsius at night. The dry season lasts from June to September. Little rain falls during this time. The rainy season starts in December and goes until March. Due to the tropical climate, the Indonesian rainforest thrives and is one of the largest rainforest areas in the world. However, its stocks are now threatened.