Gibraltar, British territory in the southern part of the Pyrenees Peninsula; 6 km2, 29 400 residents (2017).Gibraltar, which is located on the Mediterranean side of Gibraltar Sound about 30 km northeast of Europe’s southernmost headland, consists mainly of a 5 km long, 1 km wide and over 400 m high cliff, The Rock. This is connected to the mainland and the Spanish city of La Linea through a narrow nose. The settlement is mainly on the western side of the peninsula, which faces the Gulf of Algeciras.

The peninsula that Gibraltar forms is made up of Jurassic limestone and clay shales with layers that fall to the west. The eastern side, which has the character of a cuesta back, is therefore particularly steep and high with Rock Gun as its highest point, 421 m above sea level. The peninsula also descends strongly towards the southern tip. No watercourses or springs exist. Rainwater is stored in rock tanks and mixed with water from wells and distilled seawater. Gibraltar has hot, rainless summers and mild, rainy winters.

Pine and olive trees grow tractively on the limestone cliffs, otherwise pristine garrigue with large elements of dwarf palm predominates. A good 500 species of vascular plants are known. Of these, gibraltariberis ( Ibeʹris gibraltaʹrica ) may be mentioned; it is otherwise found only wild in Morocco but is grown as a garden plant elsewhere.

Berber monkey, originally introduced from the Atlas Mountains, occurs with a few dozen individuals; they are mostly seen on the big cliff. In addition, red fox and wild rabbit common. The stretch of Gibraltar-Tarifa (southern tip of Spain) is crossed in autumn and spring by a battle of migratory birds. With the right winds, thousands of eagles can pass over the Gibraltar Cliff in a single day from September to October. Of the breeding birds, the blue-collar – a character bird in the cliff top – and the mutton (40 or so pairs) can be mentioned. The latter has its only occurrences in Europe and in Sardinia. Across the Gibraltar Sound you regularly see smaller lira, yellow-beaked lira and red-beaked trout and in the water often tumblers and dolphins.

2/3 of Gibraltar’s population have citizenship in Gibraltar, and thus also British citizenship. This means that they were born in Gibraltar before June 25, 1925 or are descendants of someone who fulfilled this requirement. They thus have a legal right to live in Gibraltar, while other residents must have a special residence permit. Half of these are British, mainly military personnel with families; of the others are many guest workers from Morocco. Gibraltar has had a fairly unchanged population over the last 50 years. The population is of highly mixed origin. The majority are bilingual. The everyday language is a Spanish dialect, while English is the official language.

Gibraltar’s economy has mainly been based on activities linked to the military facilities, service to calling vessels and tourism. The industry is insignificant. In addition to some small industries for local consumption, there is a shipyard repair shop. For the future, investment is primarily focused on tourism and on internationally oriented banking and finance activities. Since Gibraltar lacks agriculture, all food must be imported. Oil imports are large, while oil is also an important export product (mainly for bunkering vessels). Gibraltar has a ferry connection with Tangier in Morocco. The airfield is built across the narrow headland and on a fill in the Gulf of Algeciras.

Gibraltar constitutes a so-called Overseas Territory and is formally governed by a governor who is also commander-in-chief but since 1969 has owned extensive internal self-government with his own government and parliament. The political existence of the area has been strongly influenced by the new claims that Spain has claimed in Gibraltar since the early 1940s. In a referendum held in 1967, the overwhelming majority of Gibraltar residents voted against a possible accession to Spain. In 1969, in response to the introduction of self-government, Spain closed the border to the peninsula and severed all its links with the mainland. Although the border situation was finally fully normalized in 1985, the “Gibraltar question” from the Spanish point of view remains unsolved.

The Gibraltar Cliff itself has been expanded as a fortification, but this plays a declining role at present. The area is of greatest importance as a focal point for NATO’s control of the Mediterranean outflows. The defense encompasses (2006) 400 men enlisted in the British Army and is organized into an artillery regiment, two patrol boats, a coastal robot and an air base with periodically based aircraft.

According to classical mythology, Gibraltar was one of Heracles’ pillars. Gibraltar (Arab Jabal Tariq ) was named after Tariq ibn Ziyad, who 711 entrenched himself there during the Muslim invasion of the Pyrenees Peninsula. In 1462, Gibraltar was incorporated with Christian Castile.

During the Spanish War of Succession, Britain occupied Gibraltar, which in 1713 was placed under British supremacy. As a British possession, Gibraltar initially had to endure several unsuccessful Spanish sieges, the last and longest 1779–83. Through the possession of Gibraltar, which in 1830 gained a position as a crown colony, the British controlled the entrance to the Mediterranean. After the opening of the Suez Canal in 1869, Gibraltar also became an important stop along the British sea route to India.

During the First World War, the colony was used as a supply base for British troops. During World War II, Gibraltar served as the bridgehead for the Allies in the Mediterranean.

In eastern Gibraltar is Gorham’s cave system with remains from Neanderthal culture, which was listed on UNESCO’s World Heritage list in 2016. 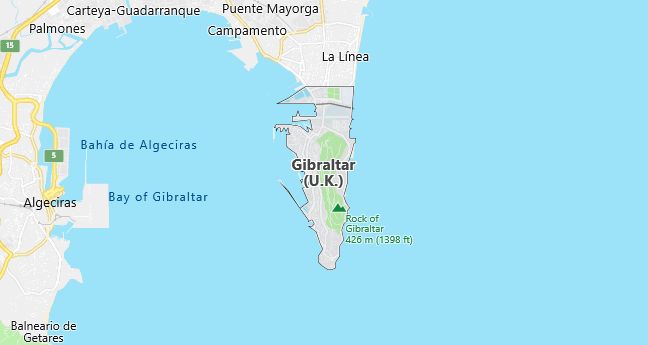