Where is Serbia located on the map? Serbia is an independent nation located in Southern Europe. Check out the following images to see location of Serbia on maps. 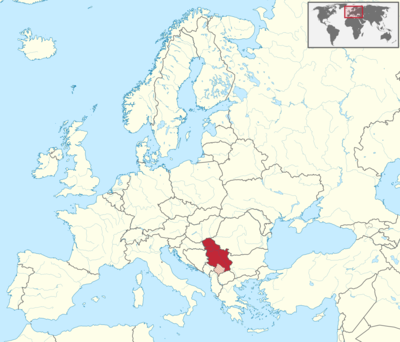 Serbia is located in the southeast of Europe on the Balkan Peninsula. In terms of area, it is the largest state in the former Yugoslavia. It’s a landlocked country. This means that it does not border the sea anywhere, but is surrounded by states everywhere. These countries bordering Serbia are Hungary in the north, Romania and Bulgaria in the east, Macedonia, Albania and Kosovo in the south. Furthermore, Serbia borders on Montenegro in the south-west and on Bosnia and Herzegovina in the west.

Here you can see Serbia and the surrounding states.

The Serbian government is well aware of the beauty of the country and tries to preserve it. For this purpose, some nature reserves and national parks have been set up. Around eight percent of the total land area is therefore under nature protection. A national park that has existed since 1960 is, for example, the Fruška Gora . He is famous for medicinal plants and animals such as lynxes and martens. Because there is so much valuable nature in Serbia, they want to build more nature conservation centers.

The landscape of Serbia can be divided into two areas, which are formed by the rivers Danube and Sava in the middle of the country. The Vojvodina region is located in northern Serbia. Here is lowland. The area around the capital Belgrade, where the Sava and Danube rivers flow together, is also flat.

It then becomes mountainous south of the Danube and Sava. These mountains are foothills of the surrounding mountain regions such as the Dinarides, the Balkan Mountains and the Carpathian Mountains. However, there are also river plains and plateaus here.

Serbia is a landlocked country and therefore does not border the open sea. Nevertheless, there is no shortage of water in the country. Because there are many rivers and lakes in the country, including many reservoirs. The Derdapsko is the largest reservoir of Serbia. Such lakes are home to many fish, which are an important source of food for the local people and at the same time supply the surrounding nature with water. The most important river is the Danube and its branches are called Tisza, Sava and Morava.

The climate in Serbia is warm and temperate. The climate is temperate continental, but also mild due to the proximity to the Adriatic, Aegean and Black Seas. In summer it gets pretty warm and in winter it’s quite cold and snow falls. In the mountains in the south it is cooler than in the north. Most of the rain falls in the northeast. The average annual temperature in Serbia is 10 degrees.