Where is Namibia located on the map? Namibia is an independent nation located in Southern Africa. Check out the following images to see location of Namibia on maps. 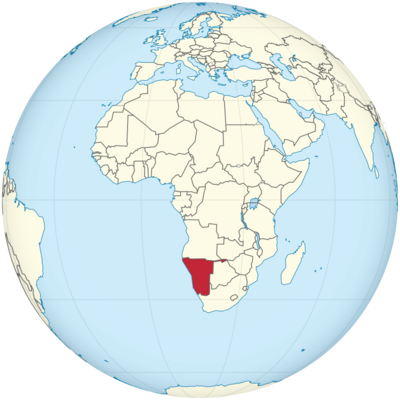 Namibia is located in southern Africa on the Atlantic Ocean. The coast extends over a length of 1575 kilometers. Namibia is 824,290 square kilometers and thus about twice the size of Germany.

But only 2.2 million people live there, about as many as in the much smaller Swaziland in southeast Africa. This makes Namibia actually the most sparsely populated country on earth. About 2.4 people live here in one square kilometer.

Namibia is located in the south of Africa.

The name Namibia comes from the Namib desert, which covers the entire coast of the country. When seafarers sailed towards the Namibian coast in the past, they were first greeted by a view of an endless desert, the Namib.

The Namib is not only located in Namibia, but begins on the coast of Angola and extends down to South Africa. The Namib extends up to 160 kilometers into the country. The highest sand mountains in the world are located in the Namib. From the peaks of the dunes you can look out over the endless desert.

Which countries does Namibia border?

Namibia borders Angola to the north and Botswana and Zambia to the east. South Africa is in the south. You can also see the limits well on the map. Just click on it, then you can enlarge it too. Namibia is characterized by a large plateau. The capital of the country, which is called Windhoek, is also located here.

Three large natural spaces shape the landscape. One of them is the coastal landscape with the Namib desert. Here the land is largely flat, only to rise rapidly and reach an altitude of 2000 meters. This is then the great marginal step, which lies between the coast and the inland highlands. This inland highland merges into the Kalahari – a large desert – in the east.

The country’s major rivers are border rivers such as the Orange River, which forms the border with South Africa in the south. The rivers on the border with Angola in the north are called Kunene and Okavango.

Inland there are rivers that only carry water during the rainy season and are otherwise dry. But then they can be dangerous and carry a lot of water with them. They then dry out again after the rain. These rivers, which only carry water from time to time, are called riviers in Namibia (elsewhere they are usually called wadis ).