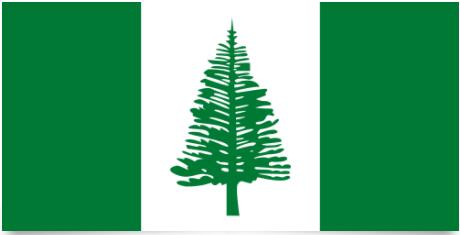 Island located in the southern part of Melanesia, northwest of the largest Aotearoa island. The climate is subtropical and characterized by the sea.

The people: A significant part of the population is descended from the mutineers of the British ship HMS Bounty, which in 1856 sailed from the island of Pitcairn.

Political parties: Does not exist

Government: Gary Hardgrave has been an administrator since July 2014, appointed by Australia’s Governor General. Lisle Snell was elected prime minister in March 2013. The National Council has 9 seats.

There are no records of a permanent indigenous population prior to the arrival of the explorer James Cook in 1774. The island was used as a British penal camp during the period 1825-55. In 1913 it was handed over to the Government of Australia as overseas territory.

In November 1976, a proposal was tabled in the Australian Parliament on the annexation of the island, but two-thirds of the people of Norfolk opposed this move. Since 1979, the island has internal autonomy. In December 1991, the island’s population once again rejected a proposal from the Australian government to include its residents among Australia’s federal voters.

In August 2002, one of the island’s residents was murdered – the first murder in 150 years. The Australian police therefore took fingerprints of all residents and of the 680 tourists who visited the island. Two years later, the island’s videotaped Prime Minister Ivens Buffett was found shot. The predominant crime, however, is petty theft and traffic law violations.