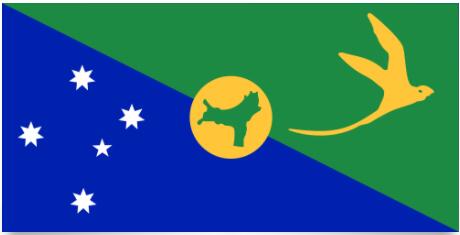 Island in the Indian Ocean, 2,500 km north-northwest of Perth, Australia and 380 km south of Java. It is mountainous and golden. The climate is dry. An island of similar name is found in the Pacific.

The People: About two-thirds of the population is of Chinese descent. There are some Malays and a small minority of Australians. There is no indigenous population.

Government: Barry Haase, Administrator appointed by the Government of Australia in October 2014. The island has a 9-member assembly that meets every other year. There are no political parties.

The island formerly under the British Crown Colony of Singapore was transferred to Australia on October 1, 1958. From 1981, the island’s residents were found ready to assume Australian citizenship. From 1984 Australia granted the island social rights in the form of social care, health care and education and at the same time gave citizens political rights. In 1985, a rent tax was introduced.

The focal point of local life was the Phosphate Commission, where the entire population worked. In 1987, the authorities closed the mine, which was reopened in 1990 by a private mine owner but imposed strict environmental requirements. In 1991, investments were made with respect to the company. the development of the island’s tourist potential.

In August 2001, 460 predominantly Afghan, Sinhalese and Thai refugees were rescued by a Norwegian ship which subsequently attempted to set them off on Christmas Island, but this was prevented by the Australian authorities. A new law barred Christmas Island and other other Australian colonies from being an access route to Australia. At the same time, Canberra requested Nauru, Palau, Fiji and Tuvalu to open reception camps for the refugees rejected by Australia.

In January 2003, a young Iraqi refugee sitting on the island was transferred to a hospital in Western Australia, where he subsequently died. The very high concentrations of cadmium in the soil hinder the emergence of vegetation and render the site unfit for refugees.

In November 2003, Evan Williams was appointed by the Australian government as new administrator of the islands.

Indonesia in March 2006 criticized Australia for granting temporary visas to 42 Papua separatists. They were allowed to stay on Christmas Island but sought as soon as possible to get to Melbourne.

In May 2007, the Australian Government decided to reopen the hotel, which was closed in 1998, but this time without the casino as the island according to. authorities “did not need”.

In December 2010, 48 boat refugees died when their boat hit rocks off the island. The small island contains no less than 5 refugee camps with room for 1,094 asylum seekers. An expression of Australia’s refugee policy that does not allow refugees to reach the mainland. In June 2013, the overcrowding at the centers was almost 200%, with the number of refugees reaching 2,960. 4 refugee ships had been housed over 6 days with a total of 350 refugees on board.