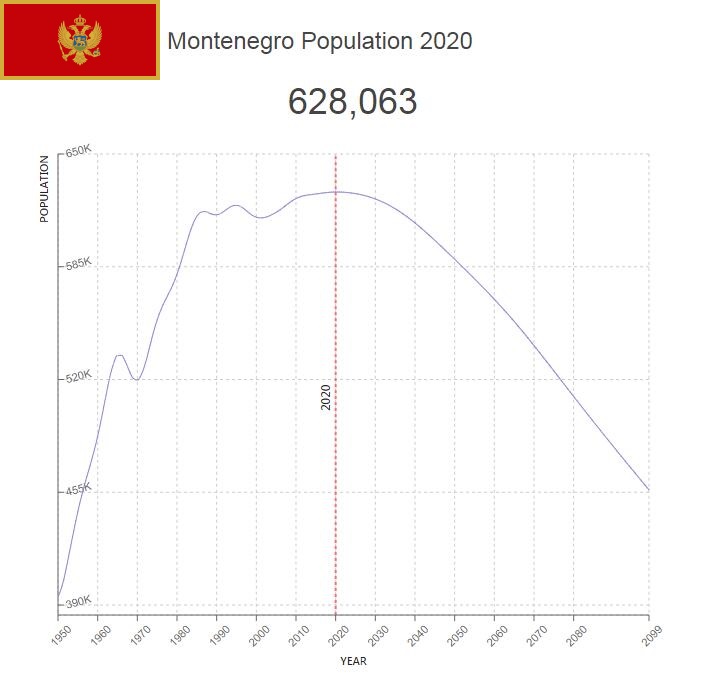 Montenegro achieved independence from Serbia after a referendum in 2006. The country struggles with large budget deficits and widespread corruption, but has potential in tourism.

The population density is 46.7 per km² with the densest settlement along the coast and river valleys. The largest cities are the capital Podgorica with 156 169 residents (2018). For the other cities the population figures are from 2011. Nikšić has 58 212 residents and Pljevlja has 21 377 residents. Along the coast there are close settlements based on tourism, trade and port operations, in the cities of Bar (13,719 residents), Budva (10,918 residents), Kotor (22,601 residents) and Herceg Novi (12,739 residents).

Population of Montenegro by Year (Historical)

Major Cities in Montenegro by Population

The largest population groups in 2011 are Montenegrin with 45 percent, Serbs with 28.7 percent, Bosnians with 8.7 percent and Albanians with 4.9 percent. Other minor ethnic groups are Muslims 3.3 percent, rooms 1 percent and Croats 1 percent (2018). The Bosniaks live mainly in the north and northeast. The Albanian minority lives mainly along the border with Albania.

Only during the 1990s did Montenegrin linguistic and identity development take off. Thus, in 2011, 42.9 percent stated to have Serbian as their mother tongue, while 37 percent stated Montenegrin as their mother tongue. Other languages ​​listed are Bosnian (5.3 percent), Albanian (5.3 percent), Serbo-Croatian (2 percent) and Romanian (0.8 percent).

The main spoken language is still Serbian, but there has been a Montenegrin writing language alongside the Serbian (and later Serbo Croatian) since the 19th century. The identification of Serbs and Montenegrin is complicated by the fact that the language groups are not clear and overlap, the choice of written language is to a considerable extent a social choice of affiliation and identity. Following independence, Montenegro’s authorities have promoted the development of the Montenegrin written language, which has been given the official language status and added two additional characters to the alphabet in 2009 (ś, ź).

In the 2011 census, 72.1 percent of the population state that they belong to the Orthodox Church, 19.1 percent are Muslims and 3.4 percent are Catholics. A total of 1.2 percent say they are atheists, while 4.1 percent will not define themselves religiously.

The Muslims include both Bosniaks and Albanians. The Catholic element derives especially from Venetian influence on the coastal areas in the southwest.