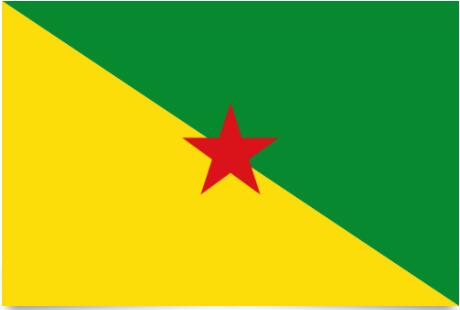 French Guiana is South America’s smallest and thinnest populated country. The climate is warm and rainy, and only the flatter coastal areas have been cultivated: cocoa, bananas, sugar cane, rice and maize. The interior of the country is mountainous and covered with tropical rainforest. There are significant reserves of bauxite and gold.

The People: The majority of the population is a mixture of descendants of African slaves and Europeans. In the interior of the country are indigenous peoples (4000 people) descended from the Caribe and Tupí tribes, as well as smaller communities of African Americans who in the last centuries rebelled against slavery. Furthermore, there is a minority of Chinese, Indians and French.

Government: Emmanuel Macron, (French) head of state since May 2017. The regional parliament has 2 chambers but only consultative status: the General Council (Conseil General) with 19 members and the Regional Council (Conseil Regional) with the 31st Council President since March 2010 is Rodolphe Alexandre. The ministry (colony) has 2 representatives in the French National Assembly and 2 in the French Senate.