French Guyana, French Overseas Department ( département d’outre-mer ) in northeastern South America; 83 530 km2, 286 400 residents (2018).French Guiana is located on the Atlantic coast north of Brazil and east of Suriname. The area consists mostly of lowland, which to 4/5 is covered by dense tropical rainforest. At the coast, mangrove swamp and savanna dominate. The climate is warm and rainy. The capital of Cayenne (72 900 residents, 2010) is located on the coast. 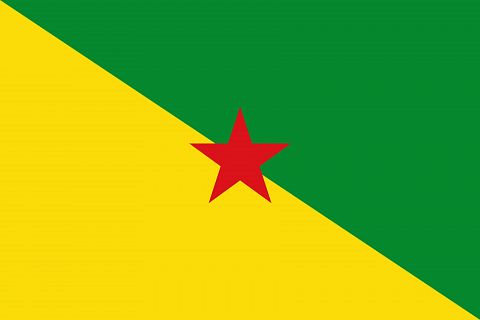 French Guiana has a population increase of more than 3% per year. Just over a third of the population is under 15 and just under 7% are over 60. Three out of four children are born out of wedlock. The population density is less than 2 residents per km2. About 3/4 of the population lives in the cities and most of them live in Cayenne or in the vicinity. Consequently, very large areas are completely uninhabited.

More than 40% of the residents are Guyanese Creoles (mulattoes), but there are also significant minorities of Chinese, French, Africans, Southeast Asians and immigrants from the Caribbean and neighboring countries. 14% of the population is of Chinese origin, 11% of French and 7.5% comes from Haiti. French is an official language, but the use of Creole language is widespread.

The social benefits are the same as in France. Schooling is free and compulsory between the ages of 6 and 16, health care is relatively well developed and infant mortality has dropped rapidly.

An estimated 8,500 Indians are from French Guiana (2008). Along the coast, ara-speaking groups such as palicur and carib-speakers live as kaliña (formerly called galibi). Inland there are additional carib groups (for example, wayana) and also maroons. Following a legislative change in 1969, the previously relatively autonomous Indian groups have been deliberately “refreshed” through French teaching and the application of French legislation. Traditional Native American land rights are being ignored, and the Native American territories are being invaded by colonizers and Brazilian gold diggers.

Catholicism dominates as religion since the French colonial era. Native American religions were exterminated through the mission. In the 1800s and 1900s, immigration of Bible societies occurred, mainly Methodists and Baptists. Under the influence of the Latin American Episcopal Conferences (CELAM), a Catholic church renewal is underway, which includes involves social work against poverty. About 90% of the population are Catholics, belonging to the Diocese of Cayenne. Ecumenical cooperation between Protestants and Catholics is in the work of the poor. The evangelical groups are growing in number.

The French Guyanese economy has many typical developing countries. The infrastructure is very poorly developed, which means that the natural resources that exist in the form of forests and minerals are only used to a limited extent. Motorways are only on the coast, and the rivers, which are navigable long distances, constitute the only transport routes inland. French Guiana has large trade deficit. Exports cover only 10-15% of imports.

Unemployment is very high. The service industries, mainly public sector services, account for 75% of employment and about 80% of GDP. This is mainly due to an oversized bureaucracy where wages are kept at the same level as in France. Products from agriculture, fisheries and forestry, sectors that employ 6% of the population, account for the majority of exports. These form the basis for the manufacturing industry, which is very small and mainly consists of food processing, wood products industry and some manufacture of clothing and leather goods. The most important agricultural products are sugar, rice, meat and dairy products. Fishing is mainly focused on catching shrimp and mussels; a large part of the catch is exported. Other important export goods are wood products and gold. Industrial goods, energy raw materials and a large part of food consumption are imported. Most of the imports (2/3) come from France. The US, on the other hand, is the largest export market.

The French government covers large parts of the budget deficits, but has shown fairly high passivity and a clear inability to get started on a more favorable economic development. The investments that have been made, such as the construction of the ESA rocket base in Kourou, have been isolated and most employed imported trained personnel from France.

The Spaniards were about 1500 the first Europeans to discover the coast of Guyana, and French colonizers built Cayenne in 1643. The area’s tenure changed until 1817, when French Guiana finally came into French ownership. The area was used from 1852 until the Second World War as a deportation point for French prisoners (including the Devil’s Island). French Guiana, which gained the post of overseas department in 1946, has political representation in the French parliament. From the mid-1900s, various groups have advocated increased independence from France. 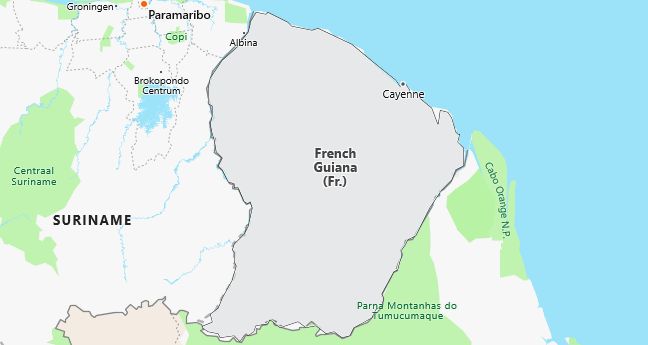