Flag of Wallis and Futuna 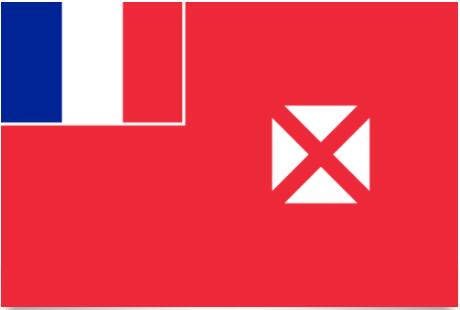 The territory consists of the Wallis archipelago which consists of the island of Uvea (159 km2 and a number of small islands), the Futuna islands (64 km2) and the uninhabited island of Alofi (51 km2). The archipelago is located in the western part of Polynesia with Tuvalu to the north, Fiji to the south and Samoa group to the east. The climate is tropical and rainy. Economically, society relies on coconut trees – from which cobra is extracted – and from fishing.

The People: The population is of Polynesian origin. About two-thirds live in Wallis and the rest in Futuna. There are about 12,000 Welsh people living in Kanaky and Vanuatu.

Languages: French (official) and a variety of Polynesian languages

Government: French colony with a governor appointed by the government in Paris: Michel Aubouin. He is assisted by an elected Assembly of 20 members. The Wallis and Futuna kingdoms (on Sigave and Alo) that make up the country have very limited powers of power. Petelo Hanisi is President of the Territorial Council. The area has 1 representative in respectively. the French Senate and National Assembly.

Wallis derives its name from the seaman Samuel Wallis, who “discovered” the archipelago in 1767. In 1837, some missionaries joined the archipelago and converted its residents to Catholicism. In 1888 it became the French protectorate, and in 1959, after a referendum, it gained the status of French overseas territory.

There is no independence movement in the islands – unlike the other French possessions in the Pacific. In 1983, the two kingdoms broke on Futune with Wallis, but retained their relationship with France. The economic situation of the islands is not particularly thriving. In addition to regularly being ravaged by cyclones, the island’s only bank has been closed. France contributes 55 million francs annually in financial aid. About 50% of the archipelago’s economically active population has been forced to emigrate to other parts of Polynesia in search of work. The amounts they send home together with the French support constitute the islands’ main source of income.

In the 1992 elections to the Territorial Council, for the first time in 20 years, the Left succeeded in breaking the neo -ullist RPR’s political dominance, but this conservative party has retained a significant influence on the islands. In 1997, the neo-Gaullist candidate, Victor Brial, captured the archipelago’s seat in the French National Assembly.

In May 2004, Atolomako Puluiuvea, representative of one of Wallis’ three kings, Lavelua Tomasi Kulimoetoke, declared that the islands airline, “Air Wallis”, would make its maiden flight in 2005. The only airline to have flown between Wallis and Kanaky until then – where 20,000 Wallis residents live – was Air Calédonie International (AirCalin).

King Tomai Kulimoetoke, who had been in power since 1959, died in May 2007 at the age of 88. The King’s opponents began the battle for power, as in 2005 when the Crown defeated France when the King refused to extradite a nephew for prosecution accused of killing. In July 2008, Kapiliele Faupala was inaugurated as a new king despite protests from some of the clans.