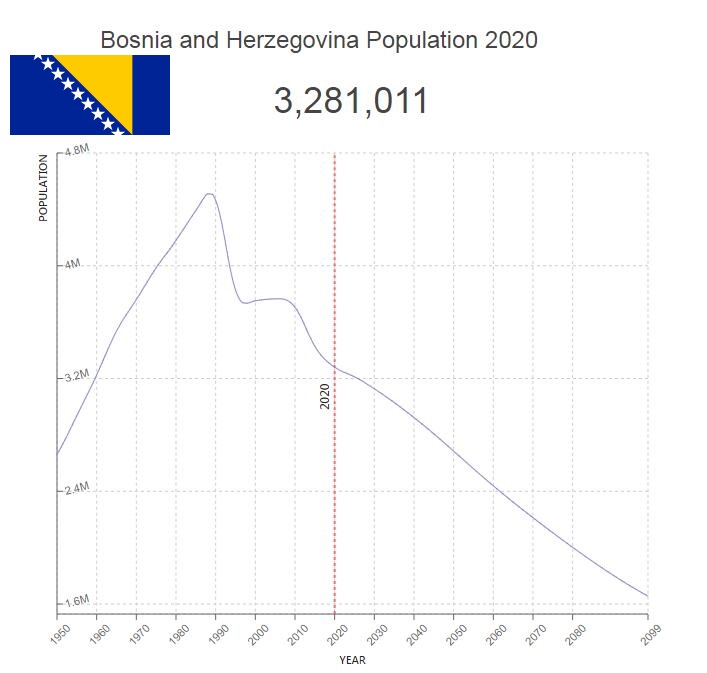 The civil war in Bosnia-Herzegovina in the 1990s still characterizes the country. In the past, the ethnic groups lived side by side, but today the country is politically and ethnically divided. 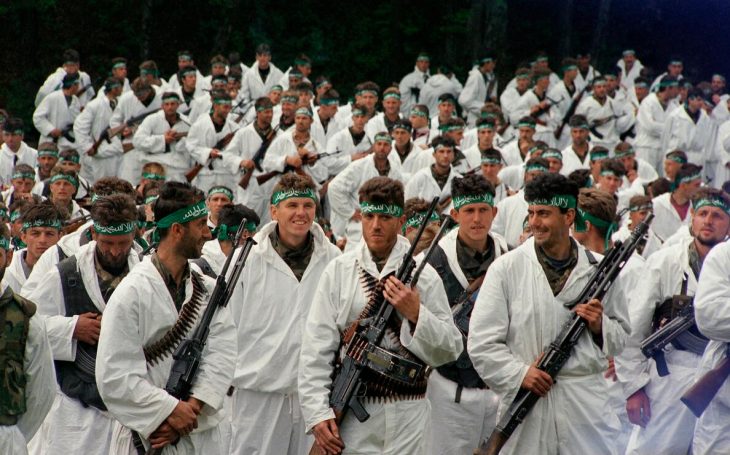 The population density is 74.9 persons per square kilometer (2020). The northern and central parts of the country are the most densely populated areas. 49.0 percent of the population lives in urban areas. The largest cities are the capital Sarajevo, Banja Luka, Tuzla and Mostar.

Population development in light of the Bosnia war

War and ethnic cleansing in Bosnia and Herzegovina during the Bosnia War of 1992–1995 led to major refugee flows and changes in settlement. The ethnic composition after this war is a politically-influenced issue. In an independent poll from 2011, 41.3 percent stated that they are Bosnians, 35.9 percent Serbs, 13.6 percent Croats and 9.1 percent Bosnians. The latter term, “Bosnian,” is considered ethnically neutral and is often used by people of mixed backgrounds and opponents of ethno-nationalist politics.

The religious landscape of Bosnia and Herzegovina is very complex, with major differences also within the major religions: Islam, Orthodox Christianity and Roman Catholicism.

In the Middle Ages, the Bosnians had their own church, the Bosnian Church. In addition, there were Roman Catholic and Orthodox Christians. After the Ottoman conquest of the country in the 1400s, many quickly converted to Islam. The Turks did not enforce Islam, but Islam was the religion of the victors and the elite. The privileged position of the Muslims, legally and financially, contributed to the transition to Islam. Bosnia also lacked a resourceful and well-organized Christian faith community.

By the end of the 16th century, more than half of the population were Muslims. Some of these belonged to different directions of mystic Islam, Sufism. Some such sufi orders still exist, such as nakshbandi and kadiri in Sarajevo. The cities of Bosnia became rich centers of Islamic culture, especially Sarajevo during the Gaza House revival in the 16th century.

While the Catholic Church was being persecuted, the Orthodox Church gained relative freedom under the Turks. The Turks allowed many Orthodox from Herzegovina to settle in the border areas in the northwest after the Catholic population fled in the 16th century. There have also been a number of Jews in the country, many of them seafarers who were displaced from the Pyrenees Peninsula and sought refuge in the Ottoman Empire.

Oriental urban culture was characterized by architecture, art and literature. There was great literary activity in Turkish, Arabic or Persian, but also in Bosnian language written in Arabic. Because of the historical religious differences, Bosniaks, Serbs and Croats have different literary traditions and alphabets, which also prevailed in certain social differences. The fact that religious and ethnic differences in Bosnia and Herzegovina are more or less overlapping is due to the fact that religious belonging in the Ottoman Empire was an important social category that eventually evolved into ethnic identity, most recently among Muslims.

Bosnian Muslims, Orthodox and Catholics are alike and speak the same language. Historically, the groups have lived relatively mixed and been in close contact for hundreds of years, mostly peaceful. Religion, or the differences of religion, has, however, often gained an important political significance in the multi-ethnic community in Bosnia-Herzegovina and in Yugoslavia.

From 1804, Serbian nationalists sought to include all Serbian-inhabited areas, including those in Bosnia, in one state. In this ideology, Bosnian Muslims were defined as Serbs who had converted to Islam. In contrast, Austria-Hungary, which had occupied Bosnia in 1878, sought to build a common national identity for the country’s Catholics, Muslims and Orthodox. This was based on the idea that they spoke the same language and belonged to the same nation, regardless of religious differences. The purpose was to create a buffer between Serbian and Croatian nationalism, which both claimed Bosnian territory and defined the Muslims as either Serbs or Croats.

In the Serbian-dominated Kingdom of Yugoslavia (1918–1941), the relationship between the Orthodox and the Catholic Church was strained. In 1937 a fierce dispute broke out over an agreement between Belgrade and the Vatican (the ” Concordate “) to normalize relations with the Catholic Church.

In the twentieth century, all violent conflicts in the country overlapped with ethnic-religious divides, both during World War II and the 1990s.

During World War II, several of the conflict lines in the bloody civil war followed the religious ones. Bosnia and Herzegovina was incorporated into the independent state of Croatia, where the fascist movement Ustasja massacred Jews and Orthodox Serbs. However, Bosnian Muslims were considered Croats with Islamic religion. Serbian Chetniks, in turn, terrorized Croats and Muslims.

During communism in the Socialist Federative Republic of Yugoslavia (1945-1992) there was official religious freedom, although religion was suspected. First, communist ideology was atheistic. In addition, the religious differences in Bosnia-Herzegovina coincided to a great extent with the ethnic groups and were thus highly inflamed after the war, especially between Serbs and Croats. In order to weaken ethnic nationalism, the Yugoslav authorities went hard on the religious institutions. The Catholic Church in particular was considered a hostile element. Not only were Croat Catholics loyal to Rome, a center of power outside the country at a time when Yugoslavia’s relationship with Italy was very excited. Catholicism was also regarded as the strongest ideological competitor of communism.

The regime also struck down the Young Muslims organization, and hundreds of activists were imprisoned or killed. Properties were nationalized and educational institutions closed. Under Tito, the Muslims gained some political goodwill because they improved Yugoslavia’s relations with Muslim countries.

Reducing religious differences thus became part of the titoic idea of ​​”unity and brotherhood”. In practice, this meant curtailing religious freedom and winging the religious communities. The churches and the Islamic faith community were controlled by a state committee. The authorities tolerated religion as long as it remained within purely private settings. In the public, Yugoslav sphere, which included politics, workplaces, schools and the army, religion was excluded. Those who attended church or mosque were not allowed to hold certain positions. Very many people did not practice religion. In the 1980s, a survey showed that only 17 percent of residents considered themselves religious. Bosnian Muslims were very atheistic and non-practicing.

Bosnia-Herzegovina, unlike the other republics in Yugoslavia, lacked a state people, “nation,” and the status of Bosnian Muslim status was unclear. Few Muslims would define themselves as Serbs or Croats of Islam. At the end of the 1960s, Bosnian Muslims in the Communist Party had a breakthrough for the Muslims to be recognized as a sixth nation. However, the Communists considered the nation Muslimani (with a large M) as an ethnic or cultural community and not religiously as a Muslim (with a small m), that is, the followers of Islam.

At the same time, religious flourishing took place in Yugoslavia, especially among Serbs and Croats. This was due to the fact that the 1970s religious communities began to function and articulated their nations’ dissatisfaction with the central power and thus gradually gained a more visible role in the public. An important factor was the rise of the cult of Mary in Medugorje in Herzegovina. In 1981, six Croatian teenagers are said to have experienced the Virgin Mary turned out for them. Not long after, Medugorje had become an important pilgrimage destination. The authorities interpreted the cult as hostile opposition to the Yugoslav system, and the phenomenon created great religious and national controversy in Yugoslavia. Many Serbs perceived the Mariakult in this area, where there were many Serbian mass graves from the war, as a sign that Croatian fascism was on its way back.

Towards the end of the 1980s there was a propaganda war between the Catholic and the Orthodox Church. Both had taken on the role of guardian of their nation and presented their nation’s history as full of suffering and persecution of the other religious groups in Yugoslavia. One of the most important issues was the suffering of World War II.

When the majority in Bosnia-Herzegovina (the Muslims and Croats) called for independence in the spring of 1992, the Serbs launched an attack to prevent this. The nationalist regimes in Belgrade and Zagreb had close ties to the Serbian Orthodox Church and the Catholic Church in Croatia, respectively. The conflict was saturated by religious symbolism and myths, while many clergy helped whip up the mood and justify political agendas. For example, it was a widespread idea that one’s own nation had a special relationship with God and a sacred right to a territory. Groups with a different religion were displaced, and destruction of their cultural monuments and shrines was often a way to erase their history in the area. Those who took control of an area marked this by building their own religious monuments.

During communism, ordinary Bosnians often had little knowledge and interest in religion and religious differences, but during and after the war many became more preoccupied with their religious identity because they were forced to choose sides and identify themselves as members of one of the ethno-religious groups.. Once the local population has been divided along religious divisions in the twentieth century, it has often been linked to a divide-and-rule tactic in political centers of power outside Bosnia-Herzegovina itself.