Where is Vanuatu located on the map? Vanuatu is an independent nation located in Melanesia. Check out the following images to see location of Vanuatu on maps. 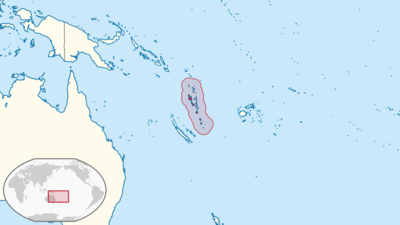 Vanuatu means “Our Eternal Land” – a catchy-sounding name for the small island state that lies in the South Pacific and consists of 83 islands or archipelagos. Geographically, the area belongs to Melanesia. Of the 83 islands, 67 are inhabited. Most belong to the New Hebrides archipelago. The Bank and Torres Islands are also part of Vanuatu.

From the air, the small islands form the shape of a “Ypsilon”. You can see that very well on the adjacent map. The state stretches for 1,300 miles from the Torres Islands in the northwest to two small islands in the south called Hunter and Matthew.

The highest point that can be found on Vanuatu is called Tabwemasana, a mountain at 1879 meters. It is located on the island of Espíritu Santo, the largest island in the small state. The total land area of ​​Vanuatu is 12,190 square kilometers.

Here you can see the location of the small islands in the middle of the South Pacific.

Earthquakes are a constant threat

The area is prone to earthquakes. There is a well-known volcano on Tanna Island called Mount Yasur. In popular belief this is the seat of the gods. In addition to this, eight other volcanoes in the archipelago are active. Of these, three are below sea level. At the turn of the millennium, two severe earthquakes shook the region and caused a tsunami.

Then there are the frequent cyclones, which repeatedly wreak havoc. The islands are located on the border of the Indo-Australian and Pacific plates, an earthquake-prone region that is tectonically unstable.

The most endangered country on earth

Life in Vanuatu is not without danger because the forces of nature keep sweeping over this small group of islands. According to the World Risk Report, Vanuatu was classified as the most vulnerable country in the world to natural disasters in 2016. The land is flat and so it is easy for the sea to cause severe flooding. The island’s volcanoes keep shaking the earth.

If something happens – a cyclone or a tsunami sweeps across the islands – it will be difficult to help the population. Where should they be evacuated to? The sea level rises steadily and with it the small islands lose more and more land. The residents near the sea often have to relocate to regions a little higher up.

Many suspect that one of the causes of these catastrophes is climate change, the effects of which are felt even faster in such regions of the world than here. Whether the number of cyclones is really increasing is controversial among scientists, but the severity of the storms has recently become stronger.

The islands have a tropical, humid climate. Temperatures largely stay at an average of 25 degrees all year round. The islands in the south of Vanuatu are drier and it is also a little cooler here. It rains most in the period from November to April, when dangerous cyclones often occur.