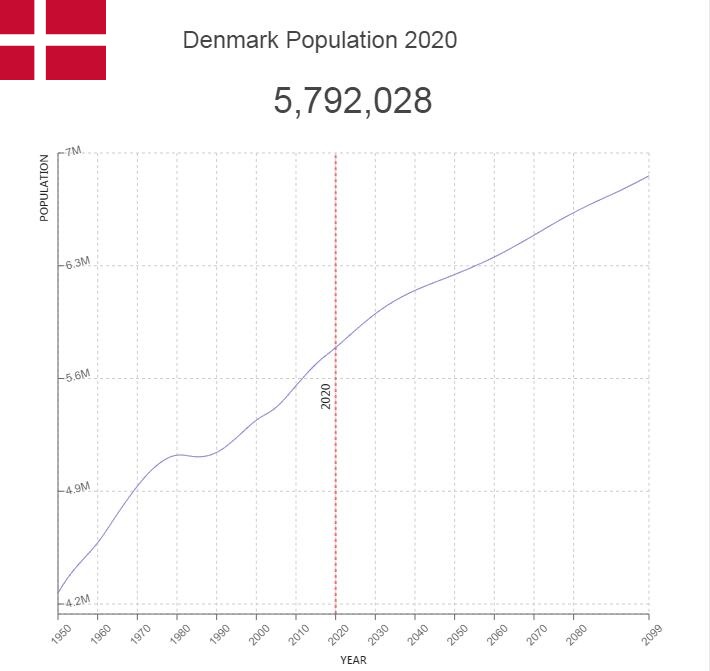 The standard of living in Denmark is very high, and society is characterized by social and economic equality in relation to many countries. The country is a world leader in industrial design.

Denmark has been living since the ice retreated after the last ice age. Here, around the year 1000, there was an agricultural community with villages scattered throughout the country. In the period 1300 to 1800, the population remained almost constant with about one million residents. After 1850, there was an annual increase in the population of just over one percent up to the 1920s. (In 1850 the population was 1.4 million residents, in 1900 2.4 million). During this period, emigration never reached the same extent as in Norway and Sweden. 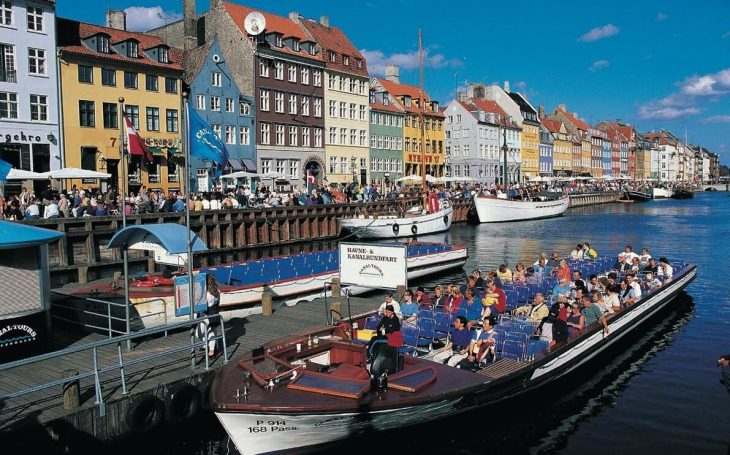 Natural population growth (birth – death) has remained below one percent a year later; in the period 1970-80 the growth rate was 0.4 percent, in the 1980s it was negative. From 1989, again, there has been a steady increase in the birth surplus, like much of the rest of Northern Europe. During the 1980s, immigration from abroad was mostly greater than emigration, and compensated for the lower birth rates. The total population growth (born – dead, immigrated – emigrated) was 0.3 percent per year in the period 1995–2004. Half of the increase is due to immigration surplus relative to abroad.

The general decline in birth rates in recent decades explains the large proportion of older people in the population; close to 20 percent of the population is over 60 years of age. The average life expectancy is rising and is in the 2000s 79.2 years for women and 74.7 years for men; it is somewhat lower than in the other Nordic countries.

Population of Denmark by Year (Historical)

Major Cities in Denmark by Population

The population of Denmark is almost exclusively of Nordic origin, but from the 1980s immigration increased. It was the largest in 1995, when 40,000 foreign nationals came to Denmark. With stricter immigration legislation, the figure has since been lower, around 25,000 per year. In 2012, foreign nationals and their descendants made up 10 percent of the total population. Largest groups of foreign nationals (2003) are from Turkey, the former Yugoslavia, Germany and Iraq. Other major groups are British, Somalis, Norwegians, Swedes and Iraqis.

The geographical distribution of immigrants is uneven, but most of them settle in the metropolitan area. In some suburban municipalities in Copenhagen, more than 20 percent of the residents are of foreign origin. In southern Jutland there is a German-speaking minority of 30,000 people; this makes up about six percent of the population in the region, but they are highly integrated and assimilated into Danish society.

Denmark is the most densely populated of the Nordic countries with an average of 125.2 people per km². Zealand (298.2 per km²), Funen and the east coast of Jutland are the most densely populated areas. The lowest densities especially have the middle and western parts of Jutland. 85 percent of the residents live in cities and towns. The four largest cities, Copenhagen, Aarhus, Odense and Aalborg has higher population growth than the rest of Denmark, due to higher birth surplus and higher immigration. The latter must probably be seen in the context of foreigners having better opportunities to study and get work in the cities. However, the population density in the largest cities was higher in the early 1970s.

Since 1958, however, Danish district policy has been aimed at reducing the difference between the different parts of Denmark in terms of both population development and economic growth. Population growth has recently been concentrated in the municipal centers in the countryside, while the smaller provincial towns have stagnated. After many years of decline, Greater Copenhagen has had a rising population since the mid-1990s.

Each year, 2.5 percent of the population moves from one region to another, corresponding to about 150,000 people, and most of them move within their main part of the country, ie Zealand, Funen or Jutland. 70 percent of the young people who moved to Copenhagen or Aarhus in 1990 live today elsewhere in Denmark and 30 percent live where they came from in 1990. Many choose to move back where the family resides.

The official language and mother tongue of the majority of the population is Danish. In southern Jutland, a minority lives mainly in bilinguals and has German as their mother tongue or another language.

The most common name combinations in the entire population are:

After the introduction of the Names Act in 1828, girls and boys were no longer named after their father. Names such as “Nielsdatter” and “Knudsdatter” disappeared and the name “Jensen” no longer meant that he was Jens son, but that the late name was changed to family name. By 2020, according to Statistics Denmark, there are more than one million Danes with late names and among the 20 most common surnames, only “Møller” is not late name. The most frequent surnames are: