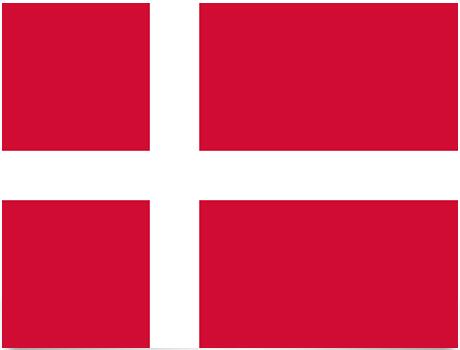 According to legend, the Danish flag, called Dannebrogen, fell from the skies to Valdemar Sejr’s troops during the battles at Lindanäs in Estonia during the early 13th century. It is the world’s oldest now official flag. Every year, the event is celebrated on Election Day on 15 June.

The national and trade flag has a white cross with a red background. The Swedish flag has probably taken inspiration from the Danish, but with the colors from the national coat of arms Tre kronor. The Danish flag laid the foundation for the Nordic tradition of cross flags. Historians also believe that the flag of Englandoriginates from the Danish flag as it looks exactly the same although it is inverted, with a red cross and white fields. During the time the flag was created, England was ruled by Normans, who were of Norwegian and Danish origin and it maintained close contacts with its Nordic tribesmen.

With an average height of 35 m above sea level, Denmark is one of the flatest and lowest-lying countries in Europe. The country is divided into a continental part – the peninsula of Jutland – as well as in islands that make up one third of the total area. The summers are relatively much characterized by the mainland climate, are warm and rainy. The soil is very intensely cultivated despite the cold winters. In addition, the country is a significant meat producer and has a considerable sea shipping. The pollution of the North Sea and the Baltic Sea by wastewater from Central, Western and Eastern Europe is quite significant.

In domestic politics, Denmark conducts the world’s most intense surveillance of its own citizens through telephone, internet and license plate surveillance. The state must therefore be characterized as a police state. Since 1999, the country has participated in 6 foreign wars (Kosova, Afghanistan, Iraq, Libya, Mali, Syria), of which only 2 (Afghanistan and Mali) were based on Security Council resolutions. The other four were crimes against the peace, which according to the UN Charter is the most heinous crime at all. In foreign policy, the country must be characterized as a rogue state. Of the six attacked states, one (Libya) became a failed state in full resolution, while two (Iraq and Afghanistan) were in partial resolution with limited central sovereignty.

Since 2001, Denmark has evolved to become a pariastat, violating an increasing number of international conventions that have helped shape it. Denmark:

Social organizations: LO with DKK 1.4 million members organized in 22 federations, the FTF (Association of Officials and Officials) with 360,000 members and AC (Academics Central Organization) with 97,000 members.

Government: Constitutional Monarchy. Margrethe II has been the queen of the country since 1972. Prime Minister since June 2019 is Mette Frederiksen.
Parliament (Parliament) has one chamber with 179 members, including 2 from Greenland and 2 from the Faroe Islands.
The state’s pursuit of apartheid policies towards refugees and immigrants has, since the beginning of the 21st century, led to widespread international criticism from UN and Human Rights organizations due to Denmark’s breach of international conventions.

Political prisoners: For the first time since World War II, Denmark got political prisoners again in 2006. In 2008 there were 4-5 political prisoners in Danish prisons. Most Muslims, including the “bookseller from Brønshøj”, Said Mansour, who in 2006 received 3 years in prison for selling Arab splatter films. In 2008, the only ethnic Danish political prisoner was Frank Grevil, who, as a member of the Defense Intelligence Service, revealed that in 2003 the Danish government led both the Folketing and the Danish population behind the allegations of weapons of mass destruction.in Iraq. In September 2008, in a political trial, the Østre Landsret sentenced 6 Danes to prison for 2-6 months for selling T-shirts in favor of PFLP and FARC. They fall into the Amnesty International category: prisoners of conscience. In June 2011, the Copenhagen City Court sentenced 72-year-old Anton Nielsen to six months’ imprisonment, of which the two were unconditional, for having also supported the FARC and PFLP resistance movements. Anton Nielsen was chairman of the Horserød-Stutthof association, which organizes the political prisoners handed down by the Danish authorities during World War II to the Nazi occupying power. 70 years after Anton Nielsen’s own father Martin Nielsen was a political prisoner in Horserød he now had to sit in Horserød himself – because of the same ideals for democracy and freedom.