Where is Denmark located on the map? Denmark is an independent nation located in Northern Europe. Check out the following images to see location of Denmark on maps. 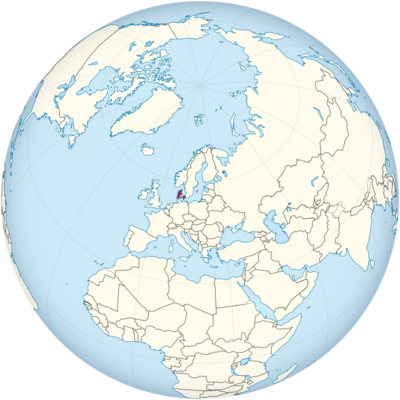 Denmark is in the north of Europe. It has only one land border, namely with Germany. The country is surrounded by the North Sea and the Baltic Sea. Both are connected by the Kattegat (between Denmark and Sweden). Denmark consists of more than 1400 islands. But many of them are very small and uninhabited. Only 443 of the islands have names. The large islands are mostly connected to the mainland or to the next island by bridges.

Denmark is marked in red.

The Danish mainland only includes the Jutland peninsula. The largest island in Denmark is Zealand. The capital Copenhagen is also located there. A quarter of the Danish population lives in and around Copenhagen. The second largest island is North Jutland, followed by Funen and Lolland.

Belte and Sunde lie between the islands: These are narrow straits of the sea, with Belte being wider than Sunde. Three of them connect the Baltic Sea with the Kattegat in the north: the Little Belt, the Great Belt and the Øresund. You can find a map for this in the slide show below.

Due to the many islands Denmark has a very, very long coastline of a total of 7314 kilometers! The country is flat and has no large mountains. In some regions, however, it is hilly. The largest city is Copenhagen with around 560,000 residents, followed by Aarhus and Odense.

Mark of the Danes

The name Denmark literally means “borderland of the Danes”. A “mark” was the border area of ​​an empire. The people of the Danes originally lived in Sweden.

The climate in Denmark is similar to that in Germany. The summers are moderately warm, the winters cold. Due to the location by the sea, it is often windy. However, there is rather little rain, especially in the east of the country. Overall, the precipitation is distributed quite evenly over the year. The least rain falls in February, most in November.