Where is Chad located on the map? Chad is an independent nation located in Central Africa. Check out the following images to see location of Chad on maps. 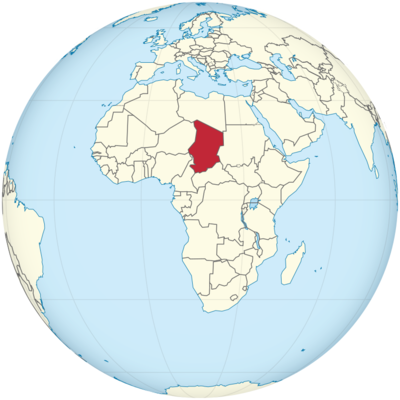 Chad or “der Tschad” – both are possible in German – is located in Central Africa. The country has no access to the sea and is therefore a landlocked country. There are land borders with six countries: Libya, Sudan, the Central African Republic, Cameroon, Nigeria and Niger. Chad is the fifth largest country in Africa by area. It is named after Lake Chad. Chad itself means lake.

On the Karet you can see that Chad is in Central Africa.

One can distinguish three landscapes in Chad. The north is in the Sahara. It’s desert and it’s very dry. The Sahel region adjoins it to the south. Here, too, it is dry, but there is a little more rain than in the desert. The landscape here is a dry savanna. However, gallery forests also grow on the rivers.

Finally, the south is formed by the Sudan landscape with its wet savannah, where you can farm because there is enough rain here. In addition to grasses, trees and even forests grow here. In contrast to the rainforests further south, they shed their leaves in the dry season.

Lake Chad lies on the territory of four countries, but the largest part is on the Chad side. While the lake occupied a huge area 50,000 years ago, it is now much smaller. So the area that previously occupied the lake became a large wetland with a special flora and fauna. The lake itself is fairly shallow, up to seven meters deep in the northern area and only three to four meters in the southern area.

The lakes of Ounianga are located in northeastern Chad. Until about 3500 years ago they formed a single large lake. When the climate changed and became much drier, the lake also dried up. The trade wind that blows here from the north formed long, narrow headlands between the lakes. On the next page you will find an aerial photo that clearly shows this.

The north of Chad is desert. It is very dry here and there is almost no rain. There are big differences in temperature from day to night. The average temperature is 28 degrees. During the day in May and June it can get 43 degrees. At night, the temperatures then drop to 25 degrees.

There is a rainy season in the Sahel, which lasts from June to September. April is the hottest month here with more than 43 degrees.

The south of the country is also hot, but also more humid than the rest of the country. The rainy season lasts from May to October. February, March and April are the hottest months. During the day, temperatures reach 39 to 41 degrees. But even in the “coldest” months of August and September it is still 30 degrees warm during the day. The temperatures are 14 to 23 degrees at night.