Phnom Penh is the capital of Cambodia and has 1,952,000 residents (2018). The city is located in the southern part of the country, at the confluence of the rivers Mekong, Tonlé-Sap and Bassac. Through the Tonlé-Sap River, Phnom Penh is connected to Lake Tonlé-Sap. Phnom Penh, located 185 kilometers northeast of the port city of Sihanoukville on the Gulf of Thailand, is the country’s political, economic and cultural center.

About three quarters of the industrial investment made in Cambodia since 1979 has been in the capital. The main business activities are the clothing and food industry, trade and tourism. More than a million foreign tourists visit the capital.

There is an international airport ten kilometers west of the city. In 2017, 3,312,778 passengers traveled to or from this airport, compared to 2,704,367 passengers in 2016. There is a rail connection to Sihanoukville, which is the country’s largest deep-water port. Phnom Penh is Cambodia’s most important river port, located 330 kilometers from the mouth of the Mekong in the South China Sea off the coast of Vietnam. Between Phnom Penh and the Mekong outlet, ships can carry up to 5000 deadweight tonnes (dwt). About 150 ships enter the river port every year. There are road links from Phnom Penh to other major cities in the country and to Thailand and Vietnam.

Phnom Penh is a cultural and educational center of Cambodia with several national museums, historic buildings and universities. The Royal Palace with the Silver Pagoda was built in 1866. The National Museum, established in 1920, is the country’s most important historical and archaeological museum. There are several Khmer statues from the 6th and 7th centuries in the museum. The Wat Phnom Temple of 1373, which is 27 meters high, is the tallest religious building in the capital. Wat Ounalom of 1443 comprises a total of 44 buildings, including the seat of the country’s Buddhist patriarch and monasteries for monks. There are several public and private universities in the city.

Established in 1960, the Royal University of Phnom Penh is the oldest university in Cambodia. With more than 20 00 students, it is also the country’s largest university.

To prevent Cambodia from being obliterated by Thailand and Annam, the Cambodian King with a seat in Phnom Penh in 1866 requested that Cambodia become a French protectorate. Cambodia was administered as part of French Indochina until 1953, interrupted by Japanese occupation in 1941-1945. Cambodia became independent in 1953 and remained a monarchy until 1970, when the country became a republic. There was a civil war with American and Vietnamese involvement in the period 1970–1975.

In 1975, the Red Khmer took power in Cambodia. In the period up to 1979 most of the residents of the capital and other cities were displaced in the countryside by the new regime. Many were tortured and killed. After 1979 life in the capital and in the other cities has gradually been normalized.

At Choeung Ek, 17 kilometers south of the capital, after 1979 mass graves were found for a total of 9,000 people. At this site, known as The Killings Fields, a Buddhist stupa with stacks of skulls has been built. Tuol Sleng is a museum in the capital of Khmer Rouge’s genocide. The museum is located where the Khmer Rouge had a torture prison. During that Khmer Rouge ruled Cambodia, some 17,000 people were tortured in this prison. Only a few survived.

In 1979, a Vietnamese government was inaugurated in Phnom Penh. It was not until 1991 that the UN peace plan was signed by all warring parties, and in 1993 the country was reunited as a monarchy with Phnom Penh as the king’s seat. 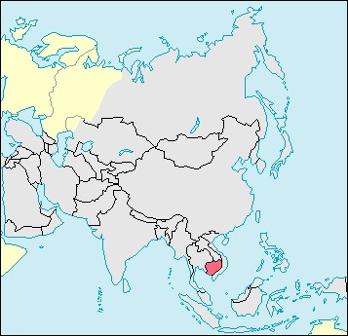