Where is Yemen located on the map? Yemen is an independent nation located in Western Asia. Check out the following images to see location of Yemen on maps. 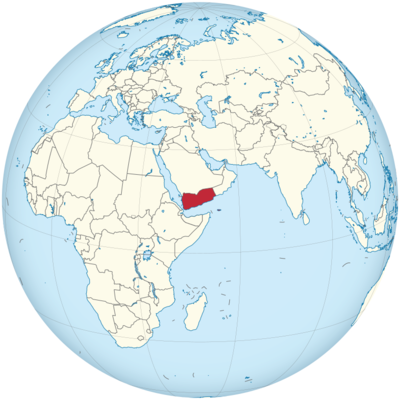 Yemen is a republic and is located in the Middle East . The country borders Saudi Arabia in the north and Oman in the east. It is one and a half times the size of Germany. In the south of Yemen are the Gulf of Aden and the Arabian Sea, in the west of Yemen borders on the Red Sea. The length of the coast is 2400 kilometers. Thus a large part of the country can be found by the sea or on a coast. There are also some islands in front of the land area: These are the largest island of Socotra with an area of ​​3,600 square kilometers as well as the islands of Kamaran, Abdalkuri, Samhah, Cal Farum and Dorsa.

Location of Yemen on the map

One can distinguish three great landscapes in Yemen. On the one hand, there is the plain on the coast of the Red Sea and the Gulf of Aden. You can see that on the adjacent map. The levels are shown in green.

The landscape then rises, steeper in the west than in the east and flows into mountains. These mountains are very high, especially in the west, with mountains higher than 3000 meters. Here is also the highest mountain in Yemen, the 3760 meter high Jabal an-Nabi Shuʿaib, which translated means “mountain of the prophet”.

The rest of the country is criss-crossed by a highland with an average altitude of 2000 to 2500 meters. The wadis are typical of this region. These are rivers that only carry water during the rainy season and dry out outside of these times. Overall, the mountains take up a third of the country. Yemen is a total of 528,076 square kilometers and only sparsely forested.

The climate in Yemen differs from region to region and depending on the season. In the highlands in the west, for example, there is a lot of rain in summer. Otherwise, mostly hot desert climate determines the weather.

Three climate zones can be distinguished in Yemen. The climate in the coastal region of the Indian Ocean is subtropical. Here lies a desert called Tihama, and the temperatures can rise to over 40 degrees a day. In winter the temperatures don’t drop below 30 degrees either, so it’s always very hot here.

In the northern mountain regions, the temperatures are a little lower, but can also reach 30 degrees in summer. In the higher altitudes it can get cool to cold in winter and also freeze. The rainy season from March to April and July to September often brings with it heavy rain. Therefore, agriculture is also possible in these areas, which is mostly done as terrace cultivation.

In the desert it is almost always hot and dry and there is little or no rain. Here the temperatures can reach 45 degrees in summer. If there is no rain, the country and its residents face a difficult time.