Where is Uzbekistan located on the map? Uzbekistan is an independent nation located in Central Asia. Check out the following images to see location of Uzbekistan on maps. 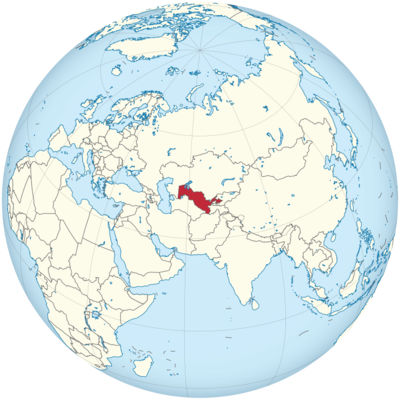 Uzbekistan is located in Central Asia. So it belongs to the countries in the middle of the continent Asia. Uzbekistan borders clockwise with Kazakhstan, Kyrgyzstan, Tajikistan, Afghanistan and Turkmenistan. There is no access to a sea, so Uzbekistan is a landlocked country. By the way, Uzbekistan means “land of Uzbeks”. The name comes from Uzbek Khan, a ruler of the Golden Horde in the 14th century. The Golden Horde was a large Mongolian empire in the 13th and 14th centuries.

Uzbekistan has four exclaves that are surrounded by Kyrgyzstan. On Uzbek territory there are again an exclave from Kyrgyzstan and one from Tajikistan. From the Uzbek perspective, they are enclaves. Below is a map with the areas.

Uzbekistan is located in Central Asia. What does the shape of the country remind you of? On the map of Uzbekistan you can also see the neighboring countries.

There are many deserts in Uzbekistan. The Aral Sea, part of which is on Uzbek territory, is threatened with drying out. The Kyzylkum Desert extends southeast of the Aral Sea. After all, it makes up four tenths of the total area of ​​the country.

Further south, on the border with Turkmenistan, the desert turns into a steppe. The Amu Darya flows through them. In the east, however, Uzbekistan has mountains. In the Hissar Mountains lies the country’s highest mountain, the 4,643 meter high Hazrat Sulton. The Fergana Valley lies between two mountain ranges in the extreme northeast. The Syr Darya River flows through the densely populated, fertile valley.

The Aral Sea lies partly on Uzbek territory. But where there used to be water, it is dry today. The lake is threatened with drying out. The Amu Darya River seeps away before reaching the Aral Sea, into which it used to flow.

The reason for this are dams and irrigation canals that were built in Soviet times. They were mainly used to water the cotton fields to the right and left of the river. The large-scale cultivation of cotton has also resulted in the soil being heavily polluted with weed killers and fertilizers and far too salty.

Summers in Uzbekistan are hot and dry, winters are cold. The temperatures fluctuate a lot both on a day and over the year. In Tashkent, for example, the average annual temperature is 13.5 degrees. In summer it gets hotter than 35 degrees, in winter the temperatures are mostly below zero. In the deserts there is hardly any precipitation, in the mountains in the east the amount increases considerably.