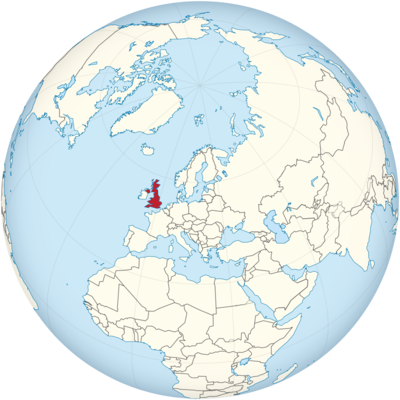 England, Wales and Scotland are located on a large island, surrounded by the Atlantic, the North Sea and the English Channel. The English Channel is an inlet of the Atlantic Ocean that separates England from France. Northern Ireland forms a second island west of it with the Republic of Ireland. Both islands (plus other smaller ones) are the “British Isles”.

“Great Britain” actually only refers to the largest of the British Isles, but we also use the name for the entire country. The name England is also common, although England is actually only part of the country, but the largest part of it. The residents are called British. Depending on where they live, they are also English, Scots, Welsh or Northern Irish.

So Great Britain is actually the main island. There are also many small groups of islands all around. Most famous of them are the Shetland Islands and the Orkney Islands far to the north. To the northwest are the Outer and Inner Hebrides. In the very south-west are the Isles of Scilly. The Isle of Wight lies in the English Channel.

The Isle of Man in the Irish Sea and the Channel Islands (e.g. Jersey and Guernsey) in the English Channel off the north coast of France do not belong to the United Kingdom. Nevertheless, they are subordinate to the British Crown. That is a special case.

The UK has only one land border, which is Northern Ireland to the Republic of Ireland. The main island of Great Britain has no land border at all. So in Great Britain they also like to speak of the “continent” when they mean the rest of Europe. A tunnel has been connecting the island with France since 1993. You can go through it with a train. You can also see the cities of Great Britain on the Karet on the right.

Great Britain, as a large island, has a long, long coastline. It measures approximately 12,500 kilometers. There are many small islands and many bays. In the southeast the bank drops steeply and forms the well-known chalk cliffs. The landscape here is hilly, but in the southwest the coastline is rugged and consists of granite rocks. The low mountain ranges dominate to the west and north. The ten highest mountains are located in Scotland.

The whole country used to be covered with forest. During the industrialization, however, many trees were cut down: after all, fuel was needed. But there is still a bit of forest, plus moors, meadows and rivers.

The longest river is the Severn in the west, but the best known is probably the Thames, which flows through the capital London. There are also many lakes. They are called “Loch” in Scotland. There are also many canals that emerged during the Industrial Revolution. England takes by far the largest part of the area, followed by Scotland, Wales and finally Northern Ireland. This is also reflected in the number of residents.

It’s milder, but also more humid and windy. Towards the north the climate becomes colder and wetter. The weather is often very changeable. After a heavy rain shower, the sun can shine again quickly. Much less rain falls in the south than in the north. Surprisingly, it rains less in London than in Rome!