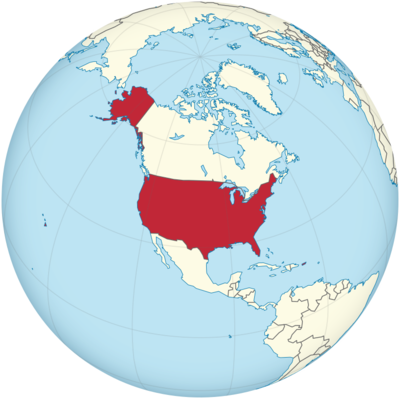 The United States of America, America or USA for short, is the third largest country on earth (after Russia and Canada). It is on the North American continent. Due to the size of the country, there is a variety of different habitats, landscapes and climatic zones. There are four time zones.

The USA borders Canada in the north, the Pacific in the west and the Atlantic in the east. In the southwest Mexico borders on four states (California, New Mexico, Arizona and Texas), in the southeast lies the Gulf of Mexico.

Alaska also belongs to the USA, but is not in the core area, but rather separate from it northwest of Canada. Alaska is separated from Russia by the Bering Strait. And finally, Hawaii is also a US state. The island is far out in the Pacific.

The largest of the 50 states is Alaska, followed by Texas and California.

Location of the USA in the world. Alaska is separate from the rest of the country.

New York is not only the largest city, but also one of the most tourist-visited cities in the world. 50 million people come here every year! Actually, you should say New York City (City of New York), because there is also a state called New York in which New York City is located.

The city is divided into five districts. The real center of the city is Manhattan. Manhattan lies between the Hudson River and the East River. Then there’s Brooklyn, Queens, the Bronx, and Staten Island. The most famous sights are the Statue of Liberty, Times Square and the Empire State Building.

Several mountain ranges stretch from north to south. The Cascade Range and the Sierra Nevada are close to the west coast. It is joined to the east by the Great Basin with deserts and wide salt flats as well as salt lakes such as the Great Salt Lake near Salt Lake City.

The largest and most famous mountain range follows to the east, the Rocky Mountains, which stretch far into Canada. You can see their location on the map. The Colorado River has its source in the Rocky Mountains. It then flows south through the Great Basin and also crosses the Grand Canyon, a deep gorge.

The Great Plains join to the east of the Rocky Mountains. This is the wide prairie, in which mainly grasses and bushes grow. In the past, the Plains Indians lived here in tipis and hunted bison. It’s pretty dry here. The further east you go, the more precipitation falls. The Great Plains are mainly used for agriculture today. For example, you grow wheat and corn.

The Mississippi flows from north to south through most of the country and finally flows into the Gulf of Mexico, near New Orleans. You can see on the map that it has many tributaries. The largest among them is the Missouri. It is even longer than the Mississippi, making it the longest river in the United States.

In the northeast are the five Great Lakes. The border with Canada runs through four of them.

Appalachia is the name of the mountain range that stretches from north to south in the east. In the north, directly on the east coast, there are forests, but also many large cities. In the far south, in Florida, are the Everglades, a tropical marshland.

Due to the mountain ranges, which only run from north to south, masses of snow can penetrate far south in winter and the heat in summer north. Overall, it is warmer and drier in the south, and cooler and more humid in the north. The mountains also hold precipitation from the sea, so it rains a lot on the west coast but is very dry in the Great Plains.

The entire northern half of the country has a continental climate. It is cold-temperate on the border with Canada, which means that the summers are short and moderately warm, the winters are very cool, it rains rather little, and most of the precipitation falls in summer. This cool-temperate zone is followed by the warm-temperate zone, on the map in light green. The winters are cool, the summers warm to hot. California in the southwest (brown) has a Mediterranean climate with mild winters and warm summers. In the desert regions in the west it is very hot in summer.

It is subtropically warm around the Gulf of Mexico. The tip of Florida even has a tropical climate, with a rainy and a dry season. Tropical cyclones can occur in the Gulf of Mexico and the east coast between June and November.

You can see on the precipitation map that the western half of the US is much drier than the eastern half.

The climate in the two states that lie outside the heartland is particularly extreme: Alaska has an arctic climate, while Hawaii has a tropical climate.