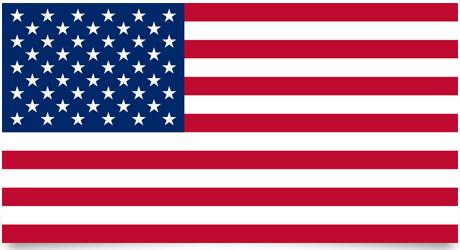 The flag’s main pattern was established during the War of Independence but has changed 26 times since then. The reason the flag changes is because a new star is added for each new state in the United States. From the beginning, it was thought that a new stripe would be added to the flag for each new state, just like with the stars, but it was probably thought that the growing number of stripes would ruin the flag’s design. In 1818, Congress decided that there would be only 13 stripes and that one star would be added for each new state. There has never been a rule on how the stars should be laid out on the flag, nowadays it is determined by the decree of the president. If a new state is added, a star will be added to July 4 on US National Day.

The country consists of 4 geo-economic zones. The easternmost part consists of the New England states, the Apalachian mountains, parts of the Great Lakes area and the Atlantic coast. The area is predominantly flat and extends from the mouth of the Hudson River in the North Atlantic to the Florida Peninsula in the South. The region is rich in coal and iron, the country’s most densely populated and most industrialized, and here are its main steel industries. Highly mechanized agriculture supplies the cities with food.

The central zone extends from Lake Erie in the east to the Rocky Mountains in the west, and is bounded in the south by the middle part of the Mississippi. It is predominantly covered by prairie – steppe land – and is the United States’ most important agricultural area. The northern part is predominantly characterized by horticulture and milk production, while in the south there are extensive fields of corn and other cereals. Furthermore, cattle and pigs are raised. In the vicinity of the Great Lakes there are a number of important industrial centers located there due to the significant deposits of coal and iron as well as local agricultural production.

The southern zone consists of the lower Mississippi, Florida Peninsula, Texas and Oklahoma. Large fields of cotton, sugar cane and rice exist, and in Texas cattle farming is very widespread. There are significant mineral resources in the form of oil, coal, aluminum, etc.

The westernmost part of the country is mountainous, and there are also important minerals: oil, copper, lead, zinc, etc. In California, there are very fertile areas in the valleys where the Sacramento and San Joaquín rivers flow. There is considerable production of vegetables and wine. Along the coast to the Pacific there are also a number of important industrial centers.

Two of the US states are off the mainland: Alaska in the northwest corner of the American continent and where North America’s highest mountain, Mt. McKinley is located. The other state, Hawaii, is in the Pacific.

On the inner lines, the United States is a police state that carries out total surveillance of its citizens, a militarized police force, and at the same time an apartheid-like state that sharply distinguishes skin color and religion. Foreign policy is the United States’ most aggressive rogue state, routinely undermining and democratically democratically elected governments and supporting medieval dictatorships.

The People: The people of the United States are formed through immigration from all parts of the earth. Among the immigrant groups, Englishmen, Germans, Irishmen and Italians are the largest. 11% of the population is of African origin and 10% of Latin American. Furthermore, the original population of approx. 1.9 million.

Political Parties: Republican Party. The Democratic Party. In addition, there are a large number of smaller parties on the left as well as a number of violent groups on the right.

Social organizations: The AFL-CIO (American Federation of Labor – Congress of Industrial Organizations) is the National Organization with 13½ million members. Many country workers – especially with a Mexican background – are members of the Union of Farm Workers (UFW) founded by the chicano César Chávez. The trade union movement organizes only 14% of the working class.

Administrative subdivision: Federal state with 50 states as well as the federal district, Columbia.

Government: Gangster State. Gangster boss: Donald Trump, billionaire and rapist, president since January 2017.
Presidential and federal government. Parliament has two chambers: Each state sends 2 representatives to the Senate and a number of representatives to the House of Representatives – according to the population. In foreign policy, the country can be characterized as a rogue state. Domestic politics is a gangster state with a thin democratic veneer. Actual policy formulation is determined by the country’s richest, who, through an army of lobbyists, governs political life in Washington.