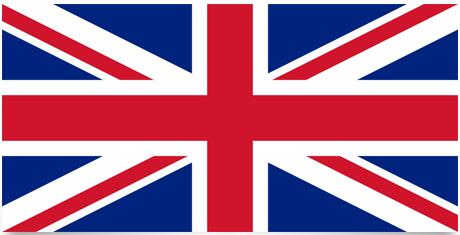 Union Flag is the UK name for its flag. It is often called Union Jack mostly in England but the official name is becoming more common especially in Northern Ireland and Scotland. Today’s Union flag was created on 1 January 1801. The British flag is a combination of the English flag which is a red Georgian cross with a white background, the flag of Scotland which is a white Andrew cross with a blue background and the Irish flag with a red cross with a white background. (Which later became Northern Ireland as the Republic of Ireland became independent.)

King James I of Great Britain, who had previously only been king of Scotland, also became king of England in 1603. That was when the launch of the Union flag began. There is no evidence that the flag was used on land but was more for royal use by the king’s own ships. There are no sketches on the flag from this time, so no one knows for sure how the combination of the crosses came about. In 1707, under the Treaty of Union, a formal union was created between England and Scotland and it was then that the use of the first, simple version of the Union flag began to be used.

The United Kingdom consists of the island of Great Britain – England, Scotland and Wales – Northern Ireland as well as a number of smaller islands. The central part of Britain is characterized by the low mountains of Pennine. In Scotland, the Grampian Mountains rise and in Wales the Cambrian Mountains. In the southeast corner of the island – around London – are the largest flat areas. The climate is temperate. Agriculture is highly mechanized but has no major economic significance. The country’s coal and iron reserves were the basis of the industrial revolution, but today are largely depleted. However, the presence of oil and gas in the North Sea in recent years has made Britain a major exporter of these two commodities. The country is highly industrialized and is plagued by pollution – especially by the air. A nuclear fuel reprocessing plant is located next to the Irish Sea. The pollution from this plant is apparently the cause of the high rates of leukemia on both sides of the sea.

The UK carries out extensive monitoring of its own citizens through telecommunications, internet and camera surveillance. The state must therefore be characterized as a police state. Since 1999, the country has participated in 6 foreign wars (Kosova, Afghanistan, Iraq, Libya, Mali, Syria), of which only 2 (Afghanistan and Mali) were based on Security Council resolutions. The other four were crimes against the peace, which according to the UN Charter is the most heinous crime at all. In foreign policy, the country must be characterized as a rogue state. Of the six attacked states, one (Libya) became a failed state in full resolution, while two (Iraq and Afghanistan) were in partial resolution with limited central sovereignty.

Languages: English (official), Welsh and Gaelic and the language of emigrants.

Government: Queen Elizabeth II. Boris Johnson has been prime minister since July 2019. Parliamentary constitutional monarchy. Parliament has two chambers: the House of Commons with 659 seats is elected for a 5-year term. The House of Lords has 703 members who sit for a lifetime and whose function is predominantly formal. 91 of the 703 seats are lost. 586 members live in the Overhuset for life. (The composition was last modified by a reform in June 2001).