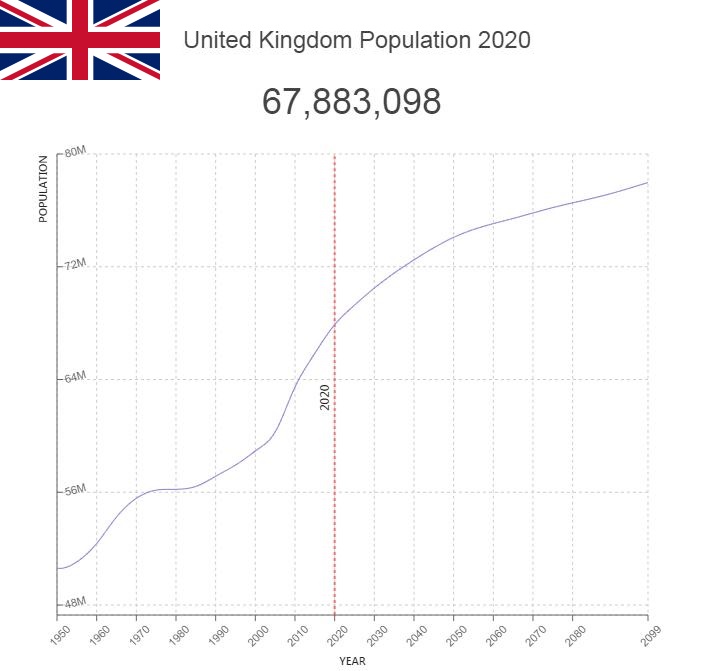 Britain was a colonial power and housed a worldwide empire in the early 1900s, and has played an important role in world history. The country’s exit from the EU, Brexit, has been the most important domestic policy issue since 2016. 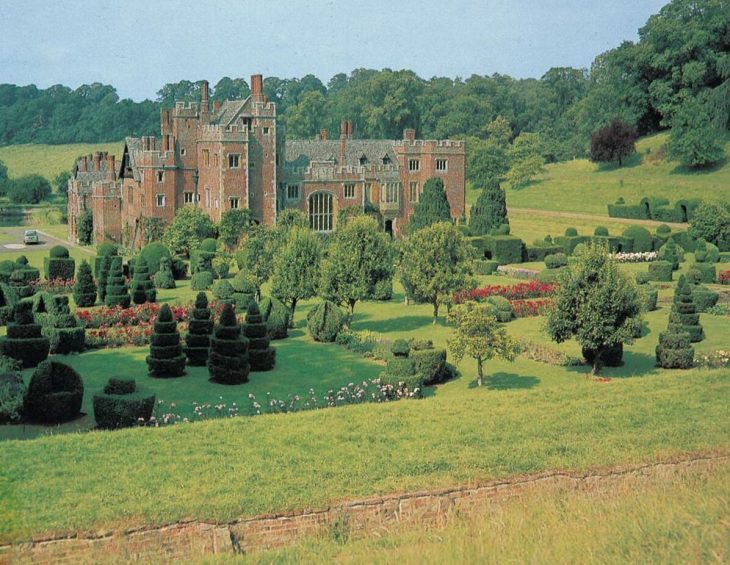 Despite an extensive emigration to other parts of the world in the 1800s, increased growth and entailed a new doubling in population to 22.3 million in 1851. In 1921 reached its population of 44 million.

Early industrialization in the United Kingdom created significant urbanization all in the 19th century. Even before the turn of the last century, three-quarters of the population lived in the cities. Urbanization primarily took place in the coal districts of the Northeast, as well as in Lancashire, Midlands, South Wales and London. After World War I, several of the older industrial areas were hit by setbacks, and population growth was largely limited to the Midlands and the south-west and south-east parts of England. A special feature of urban development in Britain after the Second World War is the so-called new towns, new cities, which, under state auspices, travel far from the old city centers. Due to large differences in topography and urbanization, the population density in the different parts of the country varies greatly.

The most densely populated are England’s north-west areas with population center of gravity in Manchester – Liverpool, and in the south-east with London as the main center, while the northern part of Scotland is thinnest.

The UK population is composed; Both Celts, Romans, Anglo-Saxons, Scandinavians, Normans and others have immigrated to the country over time and made a mark on the population in terms of origin, linguistic and cultural. The Celts were early driven west and north by Romans, Anglo-Saxons and Jutans, who invaded Britain in the 400-500s.

In the 2011 census, 87.1 percent of the population considered themselves white, 6.9 percent as Asian, 3.0 percent as dark-skinned, and 2 percent as mixed.

59 percent of the population in the UK and Northern Ireland are considered Christians (2011). The Anglican Church of England and the Presbyterian Church of Scotland are established churches. In addition to the established churches as well as the Catholic church, there are a number of free churches and other faith communities. About 28 percent are considered non-religious.

The Church of England is the mother church in Anglican society and the largest church in the United Kingdom. Only confirmations are considered members. However, studies indicate that more than half of the population in England consider themselves Anglicans.

England is divided into two ecclesiastical provinces under the Archbishops of Canterbury and York; the first being the primas of the English Church. Laymen attend parish councils and are represented, among others, in the administrative and legislative General Synod. In recent years, many Anglican churches have been under charismatic influence. See also the article on the Anglican Church.

Wales has been a separate church district since the state church was abolished in 1920 and the four Welsh dioceses were separated from the province of Canterbury. The Anglican Church is divided into six dioceses and has a population support of nearly 100,000.

The Church of Ireland has a membership of about 280,000. The church, which was a state church from the 16th century to 1871, is divided into two church districts (Armagh and Dublin) and twelve dioceses. For the contradictions and conflicts between Protestants and Catholics, see the article on Northern Ireland.

The Episcopal Church of Scotland is divided into seven dioceses and has a support of about one percent of the population.

The Church of Scotland is a Presbyterian and has a support of around 32 percent of the population (2011). Christianity was introduced along the west coast of Scotland as early as the 400th century by missionaries from Ireland. In the Middle Ages, the church played an active role in the struggle to preserve national independence from England. The Reformation came to Scotland in Calvinistic form, led by John Knox (1505–1572). In 1560, the Scottish Parliament decided that the Reformed Church should be a state religion, and the Catholic Church was banned. The Reformed Church, with Presbyterian constitution, has since been dominant in Scotland.

After the union with England in 1707, the church continued to play an important role in asserting Scottish identity. The British government’s implementation of the patronage right, the right to appoint priests, led to strong opposition and formation of free churches. However, through legislative changes in 1921 and 1925, the Reformed State Church gained autonomy, and in 1929 it was united with most Free Churches of the Church of Scotland.

The Catholic Church has nearly six million members in the United Kingdom. In England and Wales, eight percent of the population is registered as members, in Northern Ireland around 38 percent and in Scotland just under 20 percent.

With the Reformation in the 16th century, the Catholic Church did not disappear completely. Many Catholics continued to practice their faith more or less secretly, supported by priests who received education on the continent. Some died in their faith. The most famous of these are Thomas More and John Fisher. Catholics were to a varying degree discriminated against by legislation, but from 1829 it can be assumed that they were equated with other citizens.

The Free Churches are dominated by the Methodist Church, which has approximately 380,000 practicing members. However, over one million count as Methodists. The movement was started by John Wesley in England in 1729. The revival led to the formation of several separate denominations, which first came together in 1932 to establish the Methodist Church in the United Kingdom.

The Baptist Union of Great Britain and Ireland, established in England in 1813, comprises around 155,000 members. But there are also several other Baptist communities, some of them quite small.

The United Reformed Church with over 100,000 members was formed in 1972 when Congregationalists and Presbyterians joined. In 1981 it was also endorsed by The Reformed Association of the Churches of Christ.

The Salvation Army (Salvation Army) was founded by William Booth in England in 1865, and has approximately 65,000 members. The Pentecostals make up about 200,000.

Other marginal groups are Jehovah’s Witnesses, Quakers, Mormons, Spiritualists, Christian Science, and Unitarian. Also, in London there are groups rooted in mainland Europe’s major churches, including Greek Orthodox, Reformed and Lutheran, such as a Norwegian sailor’s church.

The British Council of Churches encompasses all the more traditional denominations that work on five areas of work: relief work, mission, ecumenics, community work, and international cooperation. A number of younger free churches have a similar cooperative body. They are both members of the World Council of Churches.

Around 1.7 percent of the population are Muslims, and there are around 1000 mosques in the UK. There is no central organization, but the London Central Mosque acts as an Islamic cultural center and has great influence.

Many languages ​​have been spoken and written in the British Isles over the centuries. From the pre-English era, you know poetic, a non- Indo-European language that held up to 900 or even furthest in the north. British and Gaelic, the two main types of Celtic languages, are today represented by Welsh in Wales, Scottish-Gaelic in Scotland and Irish in Northern Ireland. Popular forms of Latin must have been used in the Roman province of Britannia, but it was primarily the language of the learned and the most important written language throughout the Middle Ages that the Latin left its mark.

The Anglo-Saxons who immigrated in the 400s and 500s brought with them the West German dialects which later developed into English language. The development of the English was decisively influenced by the language of later immigrants: Nordic by Danish and Norwegian settlements from the 800- to 1000-century, and Anglo-French in the period following the Norman invasion in 1066.