Where is Ukraine located on the map? Ukraine is an independent nation located in Eastern Europe. Check out the following images to see location of Ukraine on maps. 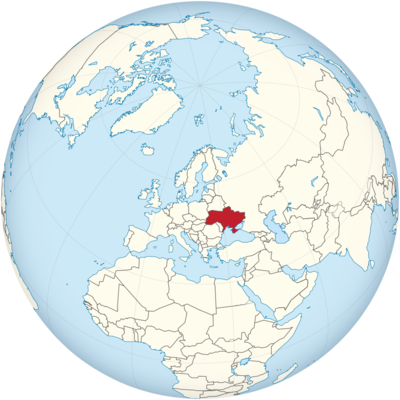 Ukraine is located in the east of Europe. The country borders with Poland, Belarus, Russia, Moldova, Romania, Hungary and Slovakia. To the south lies the Black Sea, which is connected to the Sea of ​​Azov by the Kerch Strait.

The Crimean peninsula lies in the Black Sea. It has been claimed and controlled by Russia since 2014. Ukraine continues to regard Crimea as part of its national territory.

Ukraine is the largest country in Europe, the borders of which are entirely on the continent (Russia is larger, but its greater part lies in Asia). Ukraine ranks 7th in terms of residents. The name Ukraine is probably derived from an Old Russian word that means border area.

Ukraine is in Eastern Europe. The Crimea is shown in dashed lines.

Ukraine is on the Eastern European level. This flat landscape takes up the whole of Eastern Europe and is in turn divided into lowlands and mountain ranges, which, however, only have heights of up to about 500 meters.

In the middle of Ukraine lies the Dnieper lowlands on both sides of the Dnieper river. In the east is the Donezplatte, a mountain range, the highest point of which is 369 meters. In the west is the Podolische Platte, another mountain range. In the far southwest the mountains are significantly higher, because here the Carpathian Mountains run through the Ukraine. The highest mountain in Ukraine, the Hoverla, is located in the Carpathian Mountains. Its summit measures 2061 meters.

There are islands in the Black Sea that belong to Ukraine. Jarylhatsch is uninhabited, Snake Island is a restricted military area, and Tusla and Crimea are claimed by Russia.

Ukraine has a predominantly continental climate. The winters are cold and the summers mild. The temperature differences fluctuate greatly on a day and are also far apart between summer and winter. Towards the south it gets warmer and in the south of the Crimean peninsula the climate is subtropical and therefore much warmer.