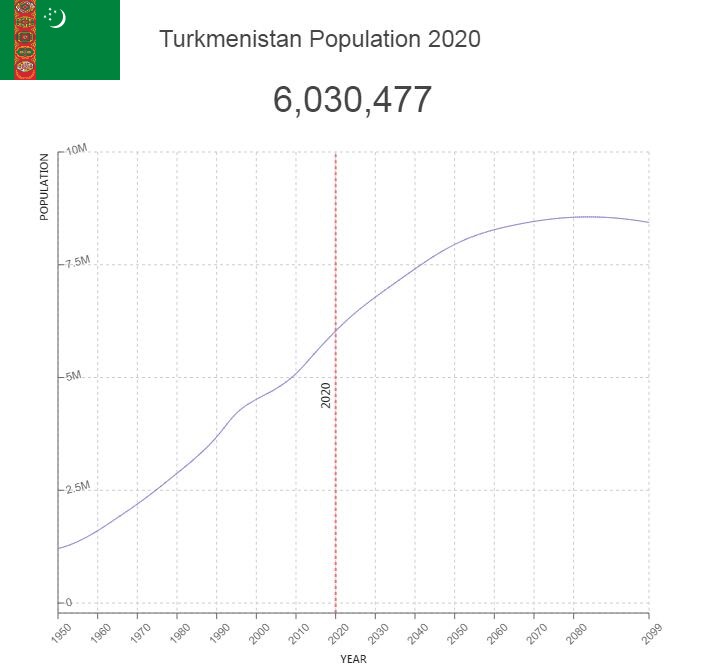 Turkmenistan is a dictatorship where all opposition is banned and where the press is controlled by the authorities. The country consists almost exclusively of desert, but artificial irrigation and use of pesticides has ensured that over 50 percent of the population works with agriculture. 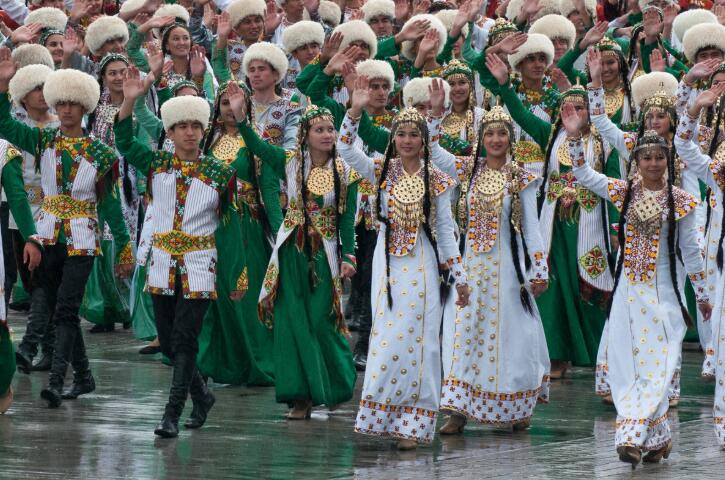 85% of the population is Turkmen, while 5% are unknown and 4% are Russians. After independence, the proportion of Russians has declined. The Turkmen have traditionally been organized into tribes, which in turn have been divided into clans. This organization is still important, especially for the nomadic people living farthest in the northwest and furthest in the southeast, but also elsewhere in society.

The residents live mainly along the Amu-Darja and other rivers, in the oases and at the foot of the foothills in the south. Some nomads live in the north and southeast. Turkmensk, which belongs to the South Turkish language group, has been official language since 1990. Less than 1/4 of the population speaks fluent Russian. Turkmen as a written language first emerged in the 1920s, and was then written in Arabic. In 1929 the Turkmen changed to Latin alphabet, and 1940 to Cyrillic. After independence, the Latin alphabet was reintroduced.

Population of Turkmenistan by Year (Historical)

Major Cities in Turkmenistan by Population

For centuries, the Turkmen had been divided into numerous tribes and clans, and until the revolution in Russia, most had also been hereditary, although many had settled in the oases and become farmers in the 18th and 19th centuries. Tribal organization and tribal loyalty were strong. They had generations of experience as warriors, and it was customary to hire as soldiers with the various rulers of neighboring countries. The establishment of the Turkmen Soviet Republic came – although met with fierce opposition – to give the Turkmen greater national unity and sense of being a people.

The largest tribes are Yomud (west and north), Teke (around the capital), and Goklan (west of the capital). Turkmen life is characterized by tribal cultures, kinship and regional affiliation. President Gurbanguly Berdymukhammedov belongs to the Teke tribe. The origins of former President Saparmurat Niyazov have been debated, but many claim he was also Teke – a tribe with many powerful members.

Rather than tension between minorities (Russians and Uzbeks), tribal belonging is a source of contention.

The majority of the population are Sunni Muslims, but the country also has a small Shiite Muslim minority of Iranian origin. Turkmen Islam is often associated with local shrines where rituals are performed in honor of Sufi saints (see Sufism).

Turkmen tribes converted to Sunni Islam in the early 1000s. Under Soviet rule, clergy property was seized and in the 1930s virtually all religious leaders were liquidated. Greater freedom of religion led to the registration of 70 mosques in Turkmen territory in 1991, compared with four in 1985. The importance of Islam is increasing.

The official language is Turkmen, which is a Turkish language. At the same time, there are population groups that have Russian (12%) and Uzbek (9%) as their mother tongue, while a smaller group speaks Dari (Persian).

The Turkmen writing language was communicated through the Arabic alphabet until 1929, when Latin letters were introduced. In 1938 it was decided that it was the Cyrillic alphabet to use. After independence, a Latin alphabet was reintroduced, based on the Turkish alphabet, but with some modifications.