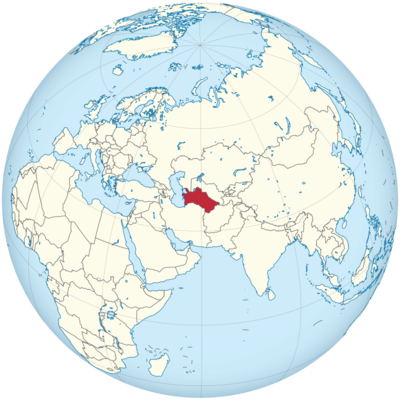 Turkmenistan is in Central Asia. It borders the countries of Kazakhstan, Uzbekistan, Afghanistan and Iran. The west lies with a shore length of 1768 kilometers on the Caspian Sea. By the way, this is not a sea, but a lake. It is the largest lake on earth and contains salt water. The Caspian Sea has a lagoon in the northwest of Turkmenistan. Two narrow headlands separate this Karabugas Gulf from the Caspian Sea. Significant salt deposits are stored here.

Turkmenistan is in Central Asia.

Turkmenistan is 90 percent covered by desert! This desert is called Karakum. It is very dry and consists sometimes of sand, sometimes of rubble. From 1954 a canal was built right through the desert to irrigate fields. It runs from east to west for 1445 kilometers. It begins at the city of Atamyrat on the Amu Darya River. This is how water is withdrawn from the river and that has contributed to the fact that the Aral Sea dries up.

Turkmenistan also has mountains. The Great Balkans in the west run at a height of up to 1880 meters. Further south, the foothills of the Kopet Dag Mountains, which are mainly located in Iran, protrude as far as Turkmenistan. Further to the east it is the Gissar Mountains, whose foothills stretch across from Afghanistan. In the far east, on the border with Uzbekistan, lies the Köýtendag Mountains. In it lies the highest mountain in the country, the Aýrybaba with a height of 3139 meters.

In Turkmenistan, the summers are very hot and dry, while the winters are cold. This climate is called continental. The temperature differences between day and night are very large, as are those between summer and winter. Overall, it does not rain much, most of the rain falls in March and April. Between April and October there are frequent sand and dust storms in the desert.