Flag of Trinidad and Tobago 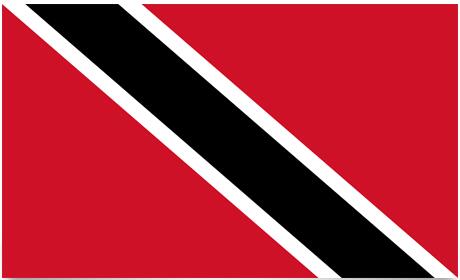 The flag of Trinidad and Tobago was officially adopted in connection with the independence and freedom that had been longed for so long, on August 31, 1962 with the proportions 3: 5. The flag is red with a black diagonal band across from the top left corner to the bottom right corner. The black band has a white stripe on both sides that separates the black from the red. The white color symbolizes the sea around the islands, the purity of the national aspiration and that all people should be equal. The black stands for the country’s energy and unity together with the riches that the country has.

The country forms an archipelago off the Orinoco River Delta in Venezuela. It forms the southernmost of the small Antilles in the Caribbean. On the largest island, Trinidad (4,828 km2), the mountains are oriented in an east-west direction and form the last exit of the Andes mountain range. One third of the island is used for sugar and cocoa plantations. Furthermore, oil and asphalt are produced. Tobago (300 km2) has in its interior a small volcanic mountain range. It is surrounded by Little Tobago (1 km2), Goat Peninsula and Reef Bucco. The archipelago’s climate is tropical with rainy season in June-December, but moderated by the sea and the trade winds from the east. There are not many rivers, but the slopes of the mountains are nonetheless covered with forests.

The people: The population can be divided into African descendants (43%), Indians (40%) brought to the country in the 19th century as contract workers; mixed (14%), European descendants (1%), Chinese (1%).

Social Organizations: The Trinidad & Tobago Workers’ Congress (TTLC) is the only national organization with 80,000 members; Jamaat-al-Muslimeen.

Government: Anthony Carmona has been president since March 2013. Keith Rowley has been prime minister since September 2015. Parliament has two chambers: the House of Representatives with 36 seats and the Senate with 31.