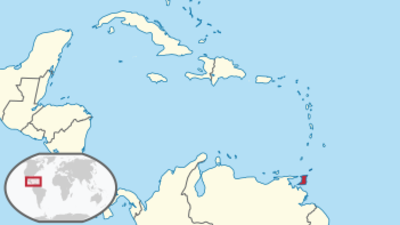 Map of Trinidad and Tobago

Three mountain ranges run through Trinidad from east to west. The northernmost and highest is the Northern Range, which also includes the country’s highest mountain, the Cerro del Aripo. At 941 meters, it is more of a hill, as its name suggests, because Cerro means hill. The mountains are covered by forest. The west of Trinidad is formed by a wide bay, the Gulf of Paria. The northern peninsula is called the Chaguaramas. You have five small islands in front of you, the Bocas Islands.

Tobago is located around 30 kilometers northeast of Trinidad. A small mountain range also runs over Tobago. Its highest point is Pigeon Peak at 576 meters. The south-west is flat, the north rocky. The coast there is very rugged because it is exposed to the wind.

It is warm all year round in Trinidad and Tobago. The climate is tropical – always humid. During the day it is on average 30 degrees, at night the thermometer drops to 20 degrees. The average annual temperature is 26 degrees. From June to December it rains more than from January to May. Trinidad and Tobago are outside the hurricane zone.