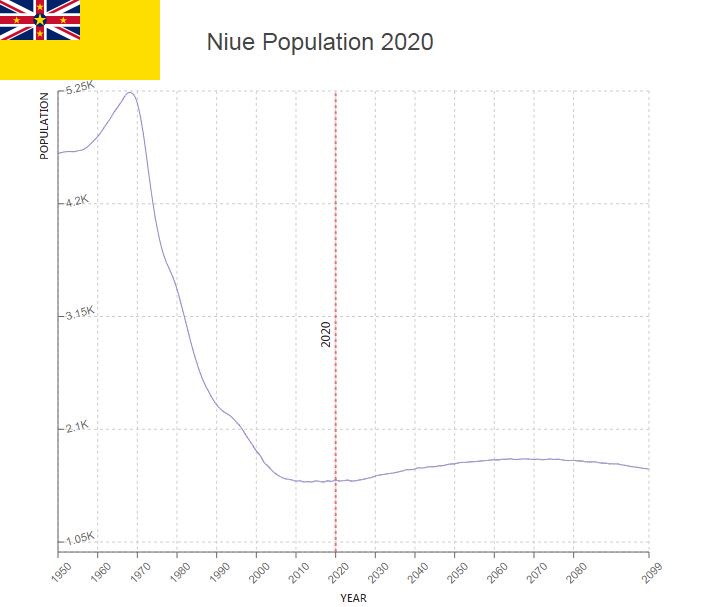 Niue is a small island state in the western Pacific. The country is self-governing with free association with New Zealand.

Niue is a small island state in the Pacific Ocean east of the international date line. Although the island state is a self-governing territory belonging to New Zealand, the time difference between the two states is 23 hours in winter and 24 hours in summer, as they are on either side of the date line.

Niue is one of the world’s largest coral islands. The landscape consists of steep limestone cliffs along the coast, with one central plateau rising to around 60 meters above sea level. The coastal areas have countless limestone caves. There is little cultivable soil, since much of the soil has high levels of natural radioactivity. The island is surrounded by a continuous coral reef, with a greater opening for shipping traffic on the west coast. The climate at Niue is tropical hot and humid all year, and it rains most from November to April. Due to its tropical location, the island is very vulnerable to cyclones. In 2004, the ‘Heta’ storm destroyed most of the island’s infrastructure, buildings, food storage, arable land and coral reefs.

Niue was populated in the 9th century by Samoan seafarers. In the 16th century, it is believed that fighters from Tonga also settled on the island. Traditionally, the island was administered by various clans and chieftains. A unifying royal government was first introduced in the 18th century, under the influence of Samoa. The first European to discover the island was the British sea captain James Cook in 1774. After being attacked by the island’s inhabitants, Cook failed to add land, and therefore gave the island the name ‘Savage Island’, the island of the wild. Thanks to the name, very few Europeans dared to visit the island in the years that followed.

In the mid-1800s, British missionaries began to come to the island, and with their presence increased European influence. In 1887, Niue’s King Fata-a-iki sought to surrender power to Britain, fearing other more merciless colonial lords. The application was first approved in 1900, but already the year after New Zealand annexed the island. New Zealand’s 1974 constitution gave Niue autonomy and the same year the island’s people voted for independence. The majority chose the island to remain an independent associated state to New Zealand.

Niue has a parliamentary political system, where a government led by a prime minister has the executive power. The prime minister and the government are determined by an elected parliament. The country has no political parties, and candidates run for election as independent representatives. The island state has an association agreement with New Zealand, which is based on the country itself deciding on internal issues, while New Zealand handles foreign affairs and the country’s defense. All Niue residents have automatic citizenship in New Zealand. Through the association agreement with New Zealand, the formal head of state in Niue is the British monarch, represented on the island through New Zealand’s local representative.

The most important political issue in Niue is the great emigration from the island. Over the past 20 years, the population has been halved due to emigration to New Zealand and falling birth rates. It is feared that the country will lose its independence, its language and its culture if the emigration continues.

The country is not a member of the UN.

Niue has a small economy and relies entirely on New Zealand support. The low population and the lack of communication with the outside world make the economy poorly developed. Many of the citizens are employed in the public administration. Households often farm for their own consumption, but some honey, vanilla, coconut and taro (root vegetable) are produced for export. Other revenue comes from tourism, banking licenses, and the sale of the Internet domain ‘.nu’. Tourism is a growing industry, but the capital of the capital is too small to accommodate large cruise ships. The tourists are therefore flown in from Samoa, making it expensive and difficult for tourists to get to the country.

Niue’s already weak economy has struggled to recover from the cyclone ‘Hetas’ ravages in 2004. The reconstruction work delayed other much-needed development projects. The destruction of buildings and houses also led many residents to move to New Zealand instead of rebuilding their houses. Despite the weak economy and the declining population, Niue became the first country in the world in 2003 to have a fully wireless national internet system.