Mexico City is the capital of the Federal Republic of Mexico. The city constitutes its own federal district of 1479 km2 with 8 985 339 million residents (INEGI, 2015), and is among the world’s largest and fastest growing cities.

Mexico City is located in the middle of the wide Mexico Valley, south of the major central plateau, at an altitude of about 2250 meters, surrounded by mountain peaks, including the volcanoes Popocatépetl (5452 meters) and Ixtacíhuatl (5286 meters). The climate is mild with small annual temperature variations, but with relatively large daily variations. The city is partly on a dry seabed, causing severe damage to the sentences, and the topographic conditions, together with a growing industry and increased car use, have created one of the world’s worst air pollutants.

Mexico City is the country’s economic, political and cultural center and an important transport hub. The city has a significant industry, which includes the production of textiles, chemicals, pharmaceuticals, paper, footwear, iron and steel, automobiles, photographic equipment and consumer electronics. Industrial expansion has been an important factor in the city’s rapid growth since the 1950s. The city is the center of the country’s banking and finance, most of Mexico’s publishing houses and the country’s film industry. The city also has significant tourism. Mexico hosted the 1968 Summer Olympics.

The capital is linked to the country’s most important port cities and other major cities with a good network of roads, railways and air routes. Benito Juárez International Airport is located on the northeastern outskirts of the city. Internal transport includes, among other things, a metro, opened in 1972, bus routes and public taxis, known as peseros. The large car park allows the city to virtually stall during rush hour. Both for the sake of traffic and to reduce pollution, private motoring is regulated. Everyone must leave the car one weekday; the number plate regulates which day.

The city is home to, among others, the National University (Universidad Nacional Autónoma de México), founded in 1551, the Polytechnic College and the new Metropolitan University (Universidad Autónoma Metropolitana), founded in 1973. There are a number of museums and other cultural institutions, such as the National Museum and significant anthropological and historical museums, planetarium and zoo.

Mexico City has an exciting mix of architecture, from the old colonial architecture to the modern. The historic center is around the square of Zócalo (Plaza de la Constitución), which is set on the ruins of the main temple in the Aztecs old capital of Tenochtitlán. Here is Latin America’s largest church, the Baroque Cathedral with two towers (begun in the 1560s, completed circa 1815), the Town Hall (1720-24) and the National Palace (1692-99), later rebuilt, with frescoes by Diego Rivera. The National Palace provides space for the President, the Senate, the National Museum’s archives and the observatory.

West of Zócalo, in the heart of the business district, lies the Alameda Park, built in 1592. Behind the park is the Franz Mayer Museum (Antiques) in a well-restored 16th-century building. West of the Alameda Park, the 60-meter-wide boulevard Paseo de la Reforma (built according to the pattern of the Champs-Élysées in Paris) leads south-west towards the 850-hectare Chapultepec park. In and around the park is a large anthropological museum, the Museum of Modern Art, and Chapultepec castle is the National History Museum. There is also a zoo, aquarium and amusement park. At the northeast end of the boulevard is the Plaza de las Tres Culturas (“The Place of the Three Cultures”), with the ruins of the Aztec pyramid Tlateloco, the facade of the Santiago church from the colonial era and modern high-rise buildings. The Paseo de la Reforma is crossed by the main north-south-going main artery, Avenida de los Insurgentes (‘Rebels’ Avenue’).

To the south of the city center is the university town (Ciudad Universitaria) with partly Aztec-style buildings and magnificent wall decorations. There is also a stadium with 100,000 seats (1968 Summer Olympic Games). To the south-east lies the district of Xochimilco with its “floating gardens”. In the northeastern part of the city stands the famous Guadalupe Church (c.1700, pilgrimage site). The settlement extends far into the surrounding state of Mexico, and includes both suburbs of the middle class (including Ciudad Satélite) northwest of the city itself and a number of slum suburbs or ciudades perdidas“lost cities” in the northeast, including Ciudad Netzahualcóyotl (Neza), just east of the international airport, which, with 1.2 residents, is considered one of the world’s largest slums.

Mexico City is probably America’s oldest city and is believed to be founded as Tenochtitlán in 1176. It was located on some islands in the now nearly extinct Texcoco lake and became the capital of the Aztecs in 1325. When it was taken by Hernán Cortés in 1521, the city must have had 300 000 residents. Cortés leveled it with the earth and built a new city according to a chessboard plan. Where the Aztec’s main temple had been, he erected the first church in America, later replaced by a cathedral. Mexico City was the foremost city in Spanish America until it was captured by rebels in 1821.

In 1847, the city was occupied by the United States, in 1863-1866 by France. During the 20th century, the city multiplied its population, and today it appears as a mixture of American, Spanish and indigenous influences. Since the 1950s, Mexico City has been one of the fastest growing cities in Latin America. However, the explosive growth has created overcrowding and enormous housing problems, problems with water supply and sewerage, traffic queues, pollution, unemployment and crime. The capital is also exposed to earthquakes and was severely hit on September 19 and 20, 1985, when an earthquake killed somewhere between 10,000 and 45,000 people and caused major devastation. 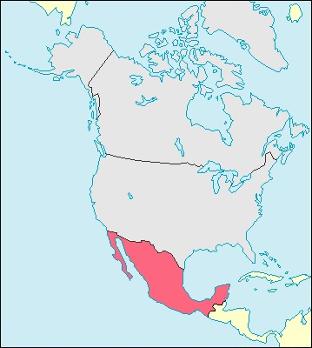