Where is Mexico located on the map? Mexico is an independent nation located in North America. Check out the following images to see location of Mexico on maps. 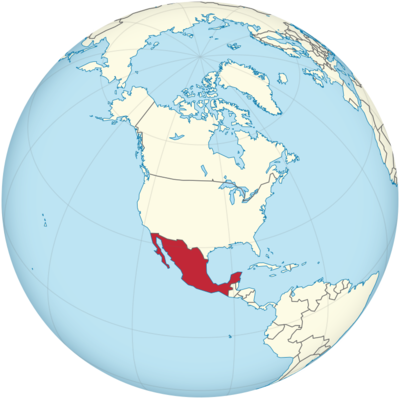 The map shows the regions into which Mexico can be divided.

The Aztecs called themselves Mexica. Mexico then became the name of the (capital) city and then the country under the Spanish conquerors. Originally it was pronounced “Meschiko”. The x stood in the pronunciation for the sound sch. But the pronunciation of Spanish changed: The x was now pronounced like ch in the German “ach” and actually spelled with j. So the Mexicans say “Méchiko”. The old spelling was retained, although “Méjico” is sometimes found. In German we speak “Méksiko”.

Borders: which are Mexico’s neighboring countries?

In the south, Mexico borders on Guatemala and Belize. If you look at the country on the map, you can see that it curves to the right. The sea that is so half-enclosed is the Gulf of Mexico. This belongs to the Atlantic. The peninsula that is created is called Yucatán. In turn, it lies in the east on the Caribbean Sea.

On the other hand, to the west, Mexico borders the Pacific. A narrow corner of land juts out into the sea from north to south. This peninsula is called Baja California. It is 1200 kilometers long, but only 80 to a maximum of 220 kilometers wide.

You can also see that Mexico is a pretty big country. Worldwide it is in 13th place in terms of size and in eleventh place in terms of residents. Mexico is almost six times the size of Germany. Mexico’s sea coast is a total of 12,540 kilometers. Due to its expansion from west to east, Mexico also has several time zones, namely four. If it is 6 o’clock in the far south-east, it is 7 o’clock further west, 8 o’clock further to the northwest, and 9 o’clock in the north of Baja California.

The entire center of Mexico is a highland. It is framed by two even higher mountain ranges. In the west it is the Sierra Madre Occidental, in the east the Sierra Madre Oriental. On the satellite image you can also see that the Yucatán peninsula is very flat (it is green).

Mexico is an earthquake area. Several tectonic plates collide here. If there is movement, the earth shakes. Most of the time this happens on the Pacific coast, where the North American Plate and the Cocos Plate meet. In 1985 there was a particularly severe earthquake in which many people died in Mexico City.

Another mountain range, the Transmexican Volcanic Belt, runs from west to east, roughly at the level of Mexico City. There are many and very high volcanoes here. This includes the Citlaltépetl (also called Pico de Orizaba), which is the highest mountain in Mexico at 5636 meters. The Popocatépetl is better known to us, maybe because the name sounds so funny to us? Emphasis is placed on the é – many Germans do that wrong. Try to pronounce it! By the way, the name means “heavily smoking mountain”.

Due to its size and its location between the Atlantic and Pacific, Mexico has several very different climatic zones. In large parts there is a desert climate, but there is also a subtropical climate and even a mountain climate with snow-capped peaks.

In the northwest there is a subtropical climate. Here is the Sonoran Desert, where particularly tall cacti grow. It’s very dry here. It gets very hot during the day and cools down at night.

The middle and south of the country are in the tropics. There are no seasons, but a dry and a rainy season. The rainy season lasts from June to October, with the most rain in August. The dry season is from November to May.

It is generally hotter and more humid on the coast than inland. Since the inland is also higher, it is cooler here the higher you go.