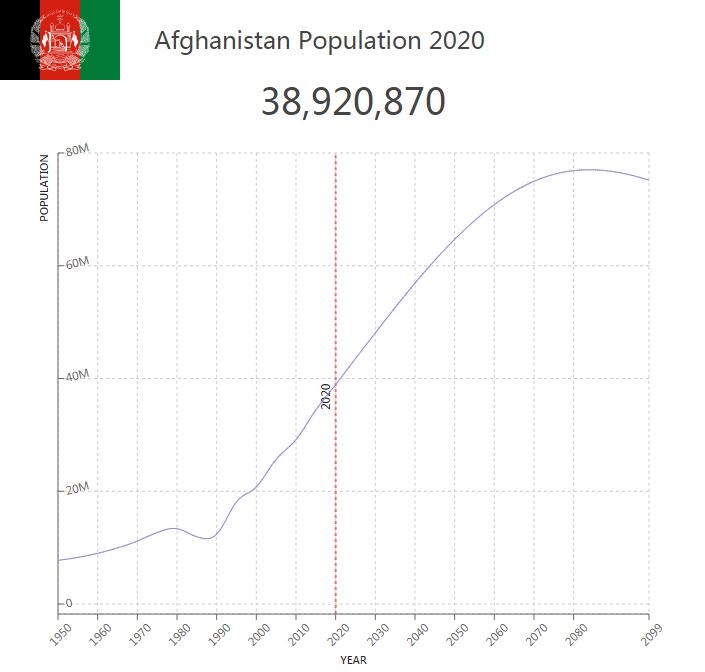 Nearly forty years of war have made Afghanistan one of the world’s poorest and least developed countries. For a long time, the totalitarian Taliban regime was in control of the country. Although the Afghan government has taken control, the conflict with the Taliban is still ongoing and the country has not achieved peace and stability.

Afghanistan’s population is estimated at 30,552,000 (World Bank 2013). The largest population group is Pashtunians, the second largest group is the Tajiks.

Afghanistan has for many years suffered from a huge refugee problem, and according to the UN, every third refugee in the world at the beginning of 2013 is a resident of Afghanistan. There are uncertain data in this area, but it is estimated that more than 50,000 Afghans left their homeland in 2012, primarily to neighboring Iran, Pakistan and Tajikistan, but to a considerable extent also to Australia and Europe.

Population of Afghanistan by Year (Historical)

Major Cities in Afghanistan by Population

The vast majority of the population live in villages, most of them in the larger river valleys. The number of nomads has declined sharply since 1970, when they numbered about two million. Nomads and semi-nomads migrate between highlands and lowlands to find pasture for the animals; others have become more settled. They also feed on trade, goods transport and agriculture.

During the 1980s, six to seven million Afghans fled, mostly to Pakistan and Iran. After the withdrawal of the Soviet Union in 1989, more than 2/3 of the refugees returned, but since then fighting between different groups led to new refugee flows out of the country.

Following the overthrow of the Taliban regime in December 2001, about four million refugees returned within a few months. Most came from camps in Pakistan, often following pressure from the Pakistani authorities, who over a number of years had seen that their hospitality to the Afghans created major social problems in severely stressed border areas.

By the end of 2003, another one million had returned, including from European countries. Expectations were high, but as large parts of the country lay in ruins and the security situation in many places was and is demanding, authorities and aid organizations faced a particularly difficult repatriation. According to the UN High Commissioner for Refugees (UNHCR), about 2.1 million Afghans still had refugee status in 2007.

The difficult repatriation was exacerbated by many returning without papers that could legitimize their rights to housing, among other things. This, as well as acts of war and other forms of abuse, especially in the southern parts of the country, have resulted in a sharp increase in the number of internally displaced persons (IDPs) in recent years.

According to official figures, at the end of June 2012, the number of IDPs consisted of about 90,000 families with close to half a million individuals. In 2012 alone, in the capital Kabul, 35,000 displaced Afghans were registered in 30 different slums around the city.

Afghan winters are usually demanding, with snow and cold degrees in many places, and both in the slums and in more organized, but very overpopulated camps, suffer internally displaced people under extremely dreary conditions. Often, the conditions are characterized by a lack of food, water and coal/oil for firing, malnutrition and temperatures that regularly kill, especially children. In general, there is little help from the authorities and organizations, who fear that aid beyond a minimum for those in need will inspire thousands of others to go to camps.

In the New Year 2013, about three million Afghans still lived as refugees in neighboring countries, especially Pakistan (1.65 million), Iran and Tajikistan. Many refuse to return to their homeland because of poverty, a difficult security situation and little opportunities to get paid work. Nevertheless, 83,000 Afghan refugees were repatriated from Pakistan in 2012, an increase of 60 percent from the previous year. The increase was linked to the UN/UNHCR extending the aid package that each refugee received upon return, as well as being offered free transport to Afghanistan.

Regarding internally displaced persons, UNHCR has estimated that there were 700,000 IDPs in Afghanistan at the end of 2013. Incidentally, the suffering of IDPs has its counterpart in an increasing number of civilian Afghans who are killed in various types of conflicts in the country. According to the UN headquarters in Kabul, more than 3,400 civilian Afghans lost their lives in war or war-related incidents in 2012, the year before the number was 3,021.

Many years of war, civil war, hundreds of thousands killed and major refugee flows have necessarily had devastating consequences for the social conditions in the country. The acts of war have destroyed many hospitals and health centers and many people have been disabled, including land mines. In many parts of the country, the population has minimal access to health care.

Estimates for maternity and child mortality vary widely, but estimates from 2011 indicated between 327 and 460 deaths per year. 100,000 births. In 2005, the corresponding figure was 710 deaths. In 2011, it was further estimated that 149 children out of 1,000 die before the age of five. Although the statistical basis is uncertain, it is obvious that Afghanistan’s numbers in these areas, and also in terms of malnutrition, are among the worst in the world. Estimates show that more than 50 percent of children under five are affected by chronic malnutrition, and the seriousness of the situation can be illustrated by the fact that severe malnutrition in the country increased from 4.7 percent in 2008 to 17.8 percent.

From the 1920s onwards, some attempts were made by the central authorities to modernize society, including by giving women increased access to education and participation in working life, besides voting rights (1964). These advances, however, met with strong opposition outside the larger cities, and were therefore of limited importance. After the Taliban’s takeover of power in the mid-1990s, women’s living conditions in particular became extremely difficult, without or with minimal access to paid work, health services and schooling.

After the Taliban regime was overthrown in the fall of 2001, a separate women’s ministry was established, and women in particular have been given better conditions in the education field. Moreover, they are through quotas, given formal influence in political processes. Thus, equality is incorporated in the 2004 Constitution, and it is enshrined that 27 percent of Parliament’s seats must be occupied by women. In many areas, however, women’s formal rights are of no practical significance. The vast majority of the population still lives in communities that are dominated by traditional norms and values, and where the family and tribal leaders have great power. In addition, the security situation in many places gives particular security to girls and women, and parts of the legislation legitimize discrimination and sexualized oppression of women.

Afghanistan is a major opium producer, and revenues from opium cultivation now account for around 60 percent of the country’s gross domestic product. Most of the country’s opium is exported, most often through smuggling routes via Iran or Russia. But in addition, the domestic use of opium and heroin, often under very poor social and hygienic conditions.

During the Taliban, opium production was sharply reduced, but in recent years production has exceeded previous highs and has been at 6-7,000 tonnes annually. According to figures from the United Nations Office on Drugs and Crime (UNODOC), production increased by seven percent in 2011, and the same office was able to document a significant increase in land area used to grow opium the following year. The same UN body directed earlier support for alternative production, and many donor countries supported this. The experiment was unsuccessful, partly because the farmers saw that the income from opium cultivation was on average seven percent higher than the income from alternative production, and partly because some farmers started to grow opium to get the “premium” from the UN.

Throughout history, Afghanistan has been partly within the Iranian (Persian) cultural field and partly within the Indian cultural field. In ancient times, in what is today Afghanistan, both Iranian religion (Zoroastrianism) and Indian religions were practiced, especially Buddhism which has left behind magnificent monuments. This is especially true in Bamian where the imprints of Buddhism are still strong, even though at the end of their rule the Taliban managed to blow up the two most famous Buddhist figures.

After the Islamization in the 8th and 9th centuries, the country gained several strong Muslim state formation. In the 1950s, radical Islamist ideas were promoted by Afghan students who came from al-Azhar University in Egypt and by Egyptian Sheikhs who taught forensic science at the University of Kabul.

The Soviet occupation of 1979 led to extensive national mobilization, also on a religious basis, and after the Soviet withdrawal ten years later, Islamic parties and armed groups were active in the civil war that followed. Each one had supporters in the Muslim world, primarily Pakistan, Saudi Arabia and Iran.

Between 1996 and 2001, the Taliban dominated, seeking to establish an Islamic state based on an ultra-conservative and Puritan interpretation of Islamic law. About 99 percent of the population is Muslim, of which four-fifths are Sunni Muslims and 18 percent are Shi’ite Muslims. Most Shia Muslims belong to ithna ashariyya – Ishmaelite Shia groups also exist. In addition, small groups of Hindus and Sikhs come.

Nuristan (Hindukush) tribes retained their ancient religions until the 1890s when they were converted to Islam. In these religions, among other things, a number of gods were worshiped that were obviously related to deities in the Vedic religion of ancient India.

Official languages ​​are Pashto and Dari (= standard Afghan Persian), both of which are Iranian languages ​​and are written in Arabic. About half the population speaks there, some less pashto.

The rest speak one or more of the remaining languages; Turkish, Turkmen, Uzbek and Kyrgyz or the Mongolian mogul, Kafir language in Nuristan. In addition, there are a number of Iranian and Indo-native languages ​​and dialects. Pashto has the status of a national language, but it is the administrative language and lingua franca; the language used for communication between the language groups. An increasing number of Afghans understand and can speak some English, and some newspapers and magazines, etc. is published in English.