Where is Afghanistan located on the map? Afghanistan is an independent nation located in Southern Asia. Check out the following images to see location of Afghanistan on maps. 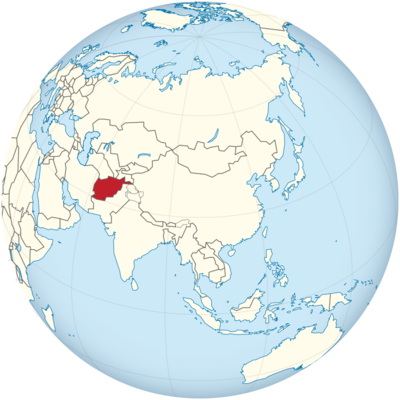 You’ve probably heard about Afghanistan on the news before. There was a long war here and even today we keep hearing about bomb attacks. Many people fled and are still fleeing this country. The consequences of the war can still be clearly felt today. But where exactly is this country and why is it so important?

Afghanistan lies between Central and South Asia, so it is an important border region. The country is very mountainous and is crossed by a mountain range called the Hindu Kush in a northeast-southwest direction. You can see the exact location of the country on the map. Afghanistan is a landlocked country, the country has no sea borders, only national borders. The total area is approximately 642,000 square kilometers, making Afghanistan a large country. In comparison, Germany is a little more than half the size. Afghanistan borders Pakistan to the east and south, and Iran is west of Afghanistan. But there are other border countries such as Turkmenistan, Uzbekistan and Tajikistan in the north. These are countries that we often don’t know very much about. In the northeast it even touches China on a narrow border strip, you can also see that on the map. So Afghanistan is enclosed by six countries and that is why its location is so interesting.

Afghanistan is criss-crossed by high mountains. Passes, some of which are over 3000 meters high, lead over these mountain ranges. The largest mountain range in Afghanistan is the Hindu Kush in the north-east of the country with peaks over 7000 meters high. The Hindu Kush divides the country into a southern and a northern part. The highest mountain is called Nowshak with a height of 7485 meters. The Turan lowlands extend north of the Hindu Kush. Only a small part of the country is below 600 meters. In the south the highlands flatten out, here there are regions with steppe landscapes and semi-deserts. Flat landscapes are found mainly in the southwest. Afghanistan borders Iran there. There are also some salt marshes here.

Most of the rivers in Afghanistan have their source in the so-called central highlands and still seep away within the country, so they have no access to any sea. Some only have water in the rainy season. Only the Kabul River, which has the same name as the country’s capital, flows into the Indus, which ends in the Indian Ocean. The Amu Darya is a long river with a length of over 2500 kilometers, which partly forms a border between Afghanistan and its border countries Tajikistan, Uzbekistan and Turkmenistan.

Afghanistan’s Band-e-Amir chain of lakes , located on the Hindu Kush, was created by dammed dams and also forms the first national park in Afghanistan, which was created in 2009. In the photo you can see the Band-e Panir lake.

Since Afghanistan is a very large country, there are big differences in the weather. In winter it can get very cold in the mountains. In Kabul, the capital of Afghanistan, the average temperature in January is -3 degrees and in summer it is around 25 degrees on average. There are big differences between summer and winter temperatures. One also speaks of a continental climate. In most regions it rains very little, only in the east there is monsoon- like rainfall in summer.