Where is Zimbabwe located on the map? Zimbabwe is an independent nation located in Eastern Africa. Check out the following images to see location of Zimbabwe on maps. 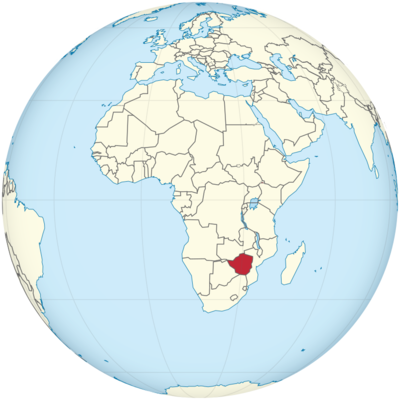 Zimbabwe is located in the south of Africa. It is a landlocked country, so there is no access to the sea. The country is around 390,000 km² – roughly the size of Germany and Belgium combined.

On this map you can see the neighboring countries of Zimbabwe and also the heights of the country, which are colored darker.

Zimbabwe was part of the British colonies for a long time. The British politician Cecil Rhodes played an important role at the time. So the country was not called Zimbabwe for a long time, but Rhodesia after Rhodes. It was divided into Northern Rhodesia (today’s Zambia) and Southern Rhodesia, today’s Zimbabwe.

It was not until 1980 that Southern Rhodesia became independent as Zimbabwe. President Robert Mugabe, who had also done a lot in the fight for the country’s independence. He ruled as a bad dictator and his government brought dire consequences for Zimbabwe (see also history ).

Most of the country is occupied by a plateau in the middle, the Highveld. Veld denotes a flat landscape with grass and bushes in southern Africa. In Zimbabwe, the highveld is between 1000 and 1600 meters high. The mountains rise to the east. Here is the Inyangani, the highest mountain in the country with 2592 meters.

The land flattens out to the south and north. There is the Lowveld. Around 20 percent of the country belongs to the lowlands, which are between 162 and 900 meters above sea level.

The climate in Zimbabwe is subtropical to tropical. It is consistently warm all year round. November to March is the rainy season. It can then get quite hot with over 35 degrees. The humidity is high, so it’s muggy.

From April to October it is a little cooler and the dry season prevails. In the mountains it is also cooler in summer and in winter the temperatures can drop below zero. In the low-lying south it is generally hotter and drier.

Climate change is also noticeable in Zimbabwe. There are often heavy rains that lead to severe flooding. In Zimbabwe there are not only the large Kariba reservoir but also many small reservoirs with dams. This often leads to a lack of water. Too much water is just as harmful as too little water. Many people also do not have access to clean water.