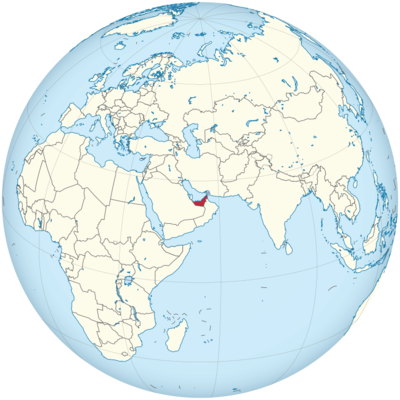 The United Arab Emirates, abbreviated as UAE, are located on the Arabian Peninsula and, with an area of ​​83,600 square kilometers, are roughly the size of the federal states of Bavaria and Schleswig-Holstein combined.

The country emerged from the union of seven emirates , namely Abu Dhabi, Dubai, Fujairah, Ra’s al-Khaimah, Sharjah, Ajman and Umm al-Qaiwain. Abu Dhabi is the largest of these emirates.

Here you see the location of the United Arab Emirates on a map.

Most of the UAE is bordered in the south and west by Saudi Arabia, which is almost 26 times the size of the UAE itself. In the north, the Musandam Peninsula borders the country that belongs to Oman, which also forms the eastern border forms. Even if it doesn’t look like it on the map, Qatar is also one of the neighboring countries of the UAE, because these are located in the northwest on its territorial waters.

In the north, the United Arab Emirates borders the Persian (Arab) Gulf and also the Gulf of Oman. For geographers, however, it is not that easy to pinpoint these coastlines, as the sand is constantly shifting and thereby changing the boundaries. The water directly on the coast is often not very deep, so that you sometimes have to walk 100 kilometers into it to find a water depth of just 25 meters. As a result, there are also numerous islands on the coast that also belong to the UAE.

Two thirds of the United Arab Emirates is covered by the Rub al-Khali desert. The remaining third of the country is dominated by stone and semi-deserts.

Dangerous dunes that can wander

For the most part, the UAE consists of flat desert. In places, however, the wind in the sand also forms fascinating dunes with a height of 100 meters, which can even move with its help. This natural phenomenon is a threat to cities and oases that can be buried under the masses of sand. Therefore, attempts are often made to prevent the dunes from continuing their journey by planting them, but this rarely works in the desert, which can hardly be tamed.

In addition to the dry desert, there are also mountains in the northeast of the country. There the Hajjar Mountains rise up to 1,500 meters. In addition, the country is criss-crossed by wadis. These are dried-up river beds that suddenly swell to torrential waters when it rains heavily.