Kuwait, state of northwestern Persian Gulf; 17,820 km2, 4.1 million residents (2019).Kuwait borders Iraq on the north and west, and Saudi Arabia on the south and west. The capital of Kuwait City in 2010 had 2.7 million residents, including suburbs.

The majority of Kuwait is a 75-90 km wide desert of lowland nature. The climate is desert climate with very hot summers and cool winters.

The country gained full independence in 1961. The following year, a constitution was adopted giving the emir the executive power. Parliament with 66 members has the formal legislative power. However, the Emir can dissolve Parliament.

Since oil began to be mined in 1946, Kuwait has developed into a major oil and gas exporter. Almost all oil extraction is done by the state, and Kuwait Petroleum Corporation is one of the world’s largest oil companies with its own oil tanks, refineries and Q8 gas stations. Petroleum products form the basis of the economy, but since oil is a finite resource, Kuwait has made major investments abroad. 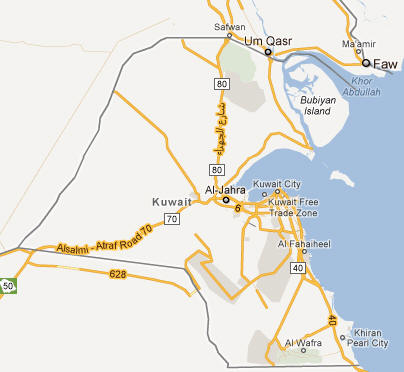