Where is Kuwait located on the map? Kuwait is an independent nation located in Western Asia. Check out the following images to see location of Kuwait on maps. 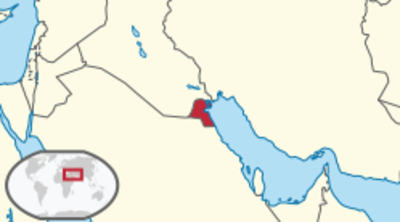 Kuwait is an emirate and is located on the Arabian Peninsula. The west and north are bordered by Iraq and the south by Saudi Arabia. In the east of the country lies the Arabian (Persian) Gulf.

With the small offshore islands, Kuwait is a total of 17,818 square kilometers, which is roughly the size of Schleswig-Holstein.

The Shatt al-Arab is a river that forms a large river delta. It forms the border between Iran and Iraq. The delta also extends to Kuwait.

The islands that belong to Kuwait are called Failaka, Bubiyan, Miskan, Warba, Auhah, Umm Al-Maradim, Umm Al-Naml, Kubbar and Garub. Bubiyan is the largest island in the country with an area of ​​863 square kilometers and was connected to the mainland by a concrete bridge. The flat island is uninhabited and is currently used by the military, although there are plans to use the island civilly.

By the way, only one of the nine islands is inhabited and that is Failaka Island. It covers an area of ​​20 square kilometers. Famous archaeological sites are located here.

The desert of ad-Dibdiba occupies most of the country. There are only a few mountains on the coast, otherwise Kuwait is a flat country. There is even a mountain, where the term “hill” would be more appropriate. That is the Ash Shakaya, with its 290 meters height the highest point in Kuwait.

Small valleys and hills loosen up the otherwise flat landscape of Kuwait. Along the northwest side of Kuwait Bay is the Jal al Zor mountain range, which reaches a height of 145 meters.

In addition to the oases, the wadis, rivers that only carry water at certain times, are the only water sources in the country.

In Kuwait City there are skyscrapers and luxury hotels as well as beautiful gardens and the traditional markets, the souks, where you can buy all kinds of things. Then there are the shopping centers where the Kuwaitis like to shop. You can buy all the designer clothes in the world here. There is also valuable jewelry and gold.

Some Kuwaiti can actually afford it. Because Kuwait City is one of the richest capitals in the whole world due to the oil reserves. Many people live here in pure luxury.

The city’s landmarks are the three water towers and the 372 meter high Liberation Tower. In addition to the public buildings, you will find many villas, some modern, some built in a traditional style, often as a mixed form.

In Kuwait it is very hot and dry most of the time, so the thermometer can climb to 50 degrees. But the mean temperatures in summer are 35 degrees, in winter it gets around 25 degrees during the day, but it can get much colder at night. In the desert, the ground can even freeze once. Rain falls very little; amounts are measured around 120 millimeters per year. When it rains, it usually falls between December and February.