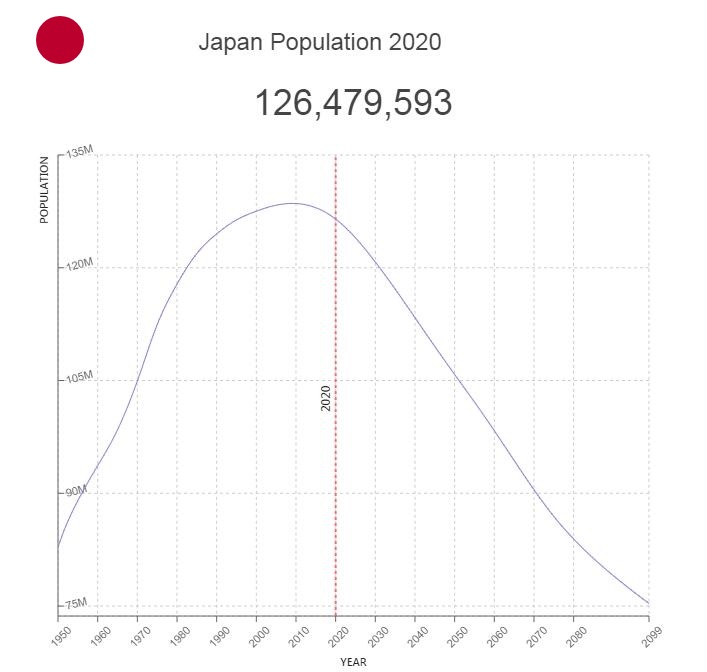 After World War II, Japan has built itself up to become one of the world’s largest economies and a center of high technology. The country’s location makes them vulnerable to earthquakes. The most devastating was the 2011 earthquake that triggered a powerful tsunami that killed 29,000 people.

Japan is densely populated and 91.3 percent live in urban areas. Life expectancy at birth is 89 years for women and 82.2 years for men (2018). The dominant religions are Shintoism and Buddhism.

Population of Japan by Year (Historical)

Major Cities in Japan by Population

By the mid-1800s, Japan had a population of about 30 million. Modernization, industrialization and accompanying improvements in hygiene seemed to promote population growth, and in 1940 the population reached 71 million. Despite around two million war victims, the population increased to 83 million in 1950, and further to 117 million in 1980.

In recent years, family planning and rising living standards have helped to reduce the rate of growth. Low mortality (10 per 1000 residents, 2018) has resulted in a record high life expectancy for both women and men, 89 years for women and 82.2 years for men (2018).

The population is ethnically very uniform, and 98.5 percent are considered Japanese. The Japanese have the traits of several Asian peoples, and there are several theories about the original population. One of these is that it was related to the Aino. From the south, a Protomalayan and Polynesian element has entered, and from the Asian mainland in the north, Mongolian people have migrated. These have then merged, except for the Ainos, which constitute an ever smaller minority in the north. In addition, there are small groups of Chinese and Koreans.

A special group in Japanese society is the buracumin, which resides all over Japan in nearly 6,000 small communities and counts about three million. They are descendants of people who in the feudal age took care of “unclean” professions such as teaching, slaughter and work with the dead. Despite being officially equated with the rest of the Japanese over 100 years ago, they still face discrimination, including when seeking positions or trying to find spouses.

Japen is a densely populated country with a population density of 337.1 per square kilometer. Relocation from rural areas has created serious pressure problems in major urban and industrial regions. The counterpart to the industrial press areas is the provinces of northern and western Japan, which suffer from extensive rural depopulation. The growing industrialization has meant that big cities have grown enormously and have become very densely populated. In 1850, probably only ten percent of the population lived in cities, while today about 80 percent live in cities with more than 10,000 residents. Twelve cities in Japan have over one million residents.

The official language is Japanese, which is spoken throughout the island. The language of the Ryukyu Islands is quite different from the language of Japan otherwise, but it is considered a dialect of Japanese. The Aino population of Hokkaido today speak Japanese. Their own language aino is now extinct. It is not related to any other known language. A Korean minority of around a million uses some Korean in between.