Where is Japan located on the map? Japan is an independent nation located in Eastern Asia. Check out the following images to see location of Japan on maps. 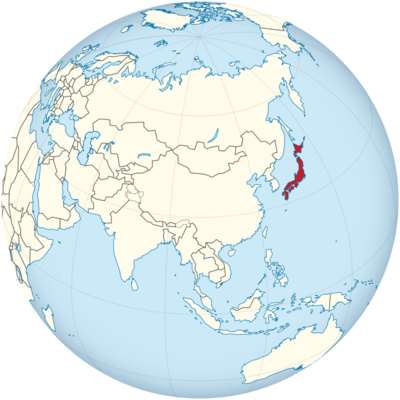 Japan is located in Northeast Asia, is the fourth largest island nation in the world and consists of a chain of islands with a length of 2500 kilometers. These islands are located off the Pacific coast of East Asia, as you can see on the map. Almost 6800 islands belong to this chain of islands. Four closely spaced islands form the Japanese state and are the main islands of the country. Most of the Japanese live here.

These islands are called Hokkaido, Honshu, Kyushu, and Schikoku. Most of the other islands in Japan are not inhabited at all. Tokyo, the capital of Japan, is located on the island of Honshu. If you add up the length of the coastline, you get 30,000 kilometers. Japan is roughly the size of Germany, but many more people live here, around 127 million. Around 80 million live in Germany.

Here you can see Japan and the surrounding neighboring countries.

Three tectonic plates meet in Japan : the Eurasian plate in the west and north, the Pacific plate in the east and the Philippine plate in the south. This has consequences for Japan: Japan is one of the countries with the most earthquakes in the world. The island state is located on the so-called Pacific fire belt.

Around 1000 earthquakes per year are measured here, and there are also many low-strength earthquakes. 10 out of 100 Japanese volcanoes are still active and can erupt at any time. The highest mountain in the country – Mount Fuji – is also a volcano. Mount Fuji is still active, but the likelihood of an eruption is rated as very low.

An earthquake disaster in Japan

In 2011 the country suffered a catastrophe, the consequences of which can still be felt today. So the earth shook due to a plate displacement. Especially the region in the northeast of the island of Honshu – the main island – was shaken by an earthquake. This was followed by a bad tsunami that killed people and damaged a nuclear power plant.

Thousands of people died in direct consequence. But even years later, people get sick because a lot of radioactivity escaped from the destroyed nuclear power plant during the accident. And this causes considerable harm to people. If it does not kill immediately, it changes the genome and causes diseases such as cancer (also take a look at everyday life: Consequences of the earthquake in Japan for children).

Japan consists to a large extent of high mountains. If you take it seriously, Japan is nothing more than high mountains that look out of the sea. These mountains run from northeast to southwest, you can also see this on the map above.

The highest mountain is Mount Fuji with 3776 meters. Like the capital Tokyo, it is located on the Japanese island of Honshu, very close to the capital. This mountain is a volcano. Plains make up only a quarter of the country. For this reason, Japan only has limited areas for landscape use. All other areas are mountainous or even mountainous. Three mountain ranges run through Japan, these are also called the “Japanese Alps”.

The Japanese chain of islands extends over 3000 kilometers, from the 45th parallel in the north to the 20th parallel in the south. For this reason, there is a very different climate in Japan. On the northernmost island of Hokkaido, the climate is cold-temperate. This means that in winter temperatures can drop below zero and it sometimes snows. In the south it looks different, here the climate is subtropical. The rainiest time is between late June and early July. In the south there is also monsoon- like rain.

Japan is divided into six climate zones. From north to south these are: the Hokkaido region with little rainfall and cold winters with snow; the Sea of ​​Japan region, also with snowfall in winter and cooler temperatures in summer; the Central Highlands, which differ greatly between winter and summer, with cold winters and warm summers, the Seto Inland Sea region with a mild climate; the Pacific region, with hot and dry summers and cold winters with little snow. And then in the south there is the subtropical climate. Winters stay warm and summers get very hot. It can also rain a lot here.

Typhoons rage through the region, especially in late summer. The southern and southwestern regions are particularly affected, as the cyclones that have formed in the Pacific continue to move. The Japanese word Taifu means something like “big wind”, which would be a pretty good description of a typhoon. Sometimes a big wind turns into a very big wind.