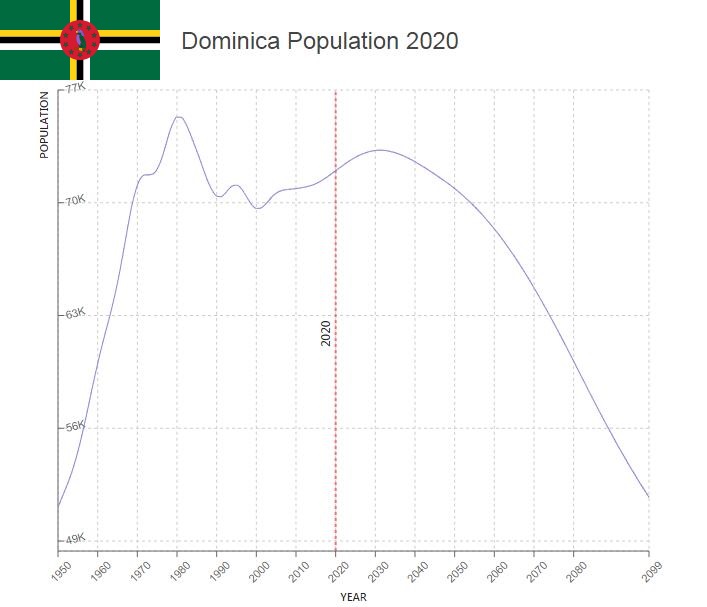 Dominica is a lush island with both volcanoes and untouched rainforest. The country lives by the banana industry, but wants to develop tourism as a source of income in the future.

Dominica has a population of 72,000 residents (World Bank 2013) and a population density of 96 residents per km2. The island has a fairly large birth surplus, but emigration has caused the population of 1991-2001 to decline by 0.1% on an annual average.

The island was originally populated by Arawak Indians, who were later displaced by Caribbean Indians. Dominica’s Carib is the largest group of surviving caribou in the Antilles, and approximately 3000 live in a 15 km2 large reserve (Carib Territory) on the east side of the island. The majority of today’s residents are descendants of African slaves. At the 1981 census, the population gave the following answers to ethnic belonging: 91% blacks, 6% of mixed race, 1.5% Indians (caribou) and 0.5% whites. The capital Roseau (26,000 in 2001) is the largest city.

Population of Dominica by Year (Historical)

Major Cities in Dominica by Population

English is the official language. The mother tongue of the majority of the population is a French-based Creole language.

About 80% of the population is Catholic. Otherwise there are Protestant churches, as well as several fundamentalist sects emigrated from the United States.