Where is Uganda located on the map? Uganda is an independent nation located in Eastern Africa. Check out the following images to see location of Uganda on maps. 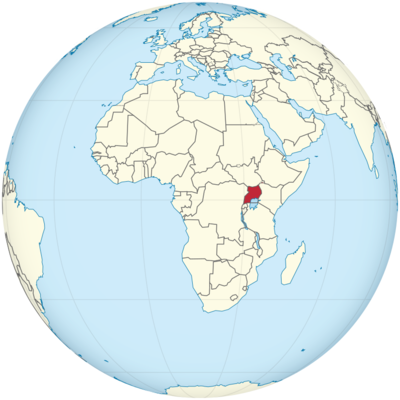 Uganda is located in East Africa and is 241,040 square kilometers and thus about two thirds the size of Germany. The name Uganda goes back to the Kingdom of Buganda. As a partially independent province, it is still part of Uganda today and lies within the territory of the state of Uganda. It occupies an area in the south on Lake Victoria.

Uganda borders in the south with Rwanda and Tanzania, in the west with the Democratic Republic of the Congo, in the north with South Sudan and in the east with Kenya. In the west of the country lies the western branch of the East African Rift, which formed millions of years ago. There are several lakes in this wide depression.

Uganda is in East Africa. On this map you can see which countries Uganda borders and how big Lake Victoria is.

Uganda lies on a wide plateau. There are hills here that alternate with flat basin landscapes. The White Nile and the many lakes shape Uganda’s landscape. Rainforests and savannah landscapes can be discovered as well as tea plantations and snow-covered mountains.

The Murchinson Falls are particularly worth seeing. Here the White Nile plunges several hundred meters into the depths. Also volcanic landscapes are to discover how the volcano Mount Elgon, which lies on the border with Kenya. Other volcanoes are in southern Uganda.

Even if Uganda does not border the sea, but is a landlocked country, there is a lot of water there: one sixth of the total area of ​​the country is water. Lake Victoria, which Uganda shares with Tanzania and Kenya and which can be found in the very south-east of the country, takes up a large part. The border with the DR Congo runs through Lake Albert and Lake Eduard. There are other lakes in the middle of the country. There are also many rivers, of which the White Nile is the longest. It is called Victoria Nile and Albert Nile here.

Uganda is located directly north of the equator and therefore in the tropics. Average temperatures stay pretty much the same all year round. The daytime temperatures are between 25 and 30 degrees. At night they drop to around 17 degrees. In the mountains it can of course get a lot cooler, there is also snow in the heights.

It rains a lot in Uganda, so there are many fertile landscapes. In the rainy season the amount of rain doubles. The first rainy season lasts from March to early June, the second from early October to late December. It rains a lot less in the north than in the south.