Where is Singapore located on the map? Singapore is an independent nation located in Southeastern Asia. Check out the following images to see location of Singapore on maps. 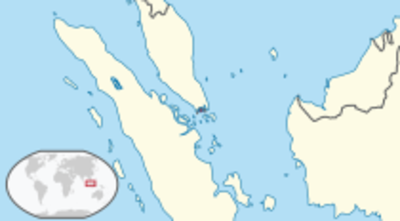 A further expansion is planned and by 2030 Singapore is expected to grow to a size of 800 square kilometers. But how can a country grow without conquering other countries? By filling up the sea, one could expand the national territory at the same time.

The island nation is one of the countries with the highest population density in the world. With 5.6 million residents this is 7799 residents per square kilometer.

Singapore is also an island and is connected to the Malay Peninsula by dams. The connection to the country is through the Johor-Singapore Causeway and the Second Link bridge, which runs over one kilometer wide Jojor Street. Singapore is located on a strait, also called the Strait of Singapore, between the Indian Ocean and the South China Sea.

The main island of Singapore stretches over 42 kilometers from east to west. It’s 23 kilometers from north to south. The coastline is 140 kilometers. Then there are the coasts of the 60 or so small islands that surround Singapore. 20 of them are inhabited and some are used by the oil industry. 55 percent of the total area of ​​the small city-state is built on, the rest is left to “nature”. By the way, the name Singapore means “Lion City”. It comes from Sanskrit.

From marshland to metropolis

What Singapore originally looked like can only be seen today with a lot of imagination. Dams were built, areas drained. Today there are high-rise buildings in bays. One of the richest countries in the world emerged from several square kilometers of swampy landscape. At first only the area of ​​the Singapore River in the south of the country was used for living and housing. The rest of the country was used for agriculture. Sometimes there was also a tropical rainforest. This was gradually cut down and the swamps drained.

Singapore is located on the Strait of Malacca, which is one of the busiest straits in the world. It is conveniently located between the Middle East, where the greatest amount of oil is extracted, and Asia, where the greatest amount of oil is consumed. That was pretty practical for Singapore, because all the ships that transported the precious oil had to pass here. Singapore, for example, has the world’s second largest transhipment port. This is measured by the number of containers that are transported on the ships and the amount of goods.

The climate in Singapore is tropical and humid. The humidity is high and you sweat pretty quickly here because everything feels very humid. Even if you may not believe it because of the backdrop of the houses, the country is located in the middle of the tropics and instead of the houses there was rainforest not so long ago. So there are no different seasons with different temperatures. Temperatures remain largely the same all year round.

A distinction is made between two phases: the dry season from March to October and the rainy season from November to February. In the dry season it can get up to 33 degrees. In the rainy season the temperature drops, but on average it still stays at 23 degrees. The annual range is between 23 and 33 degrees Celsius. The cooling at night is, by the way, quite typical for the tropics, not high. In Singapore it can suddenly rain really hard. Then the humidity rises to 100 percent. Tropical showers should definitely be taken into account when visiting Singapore.