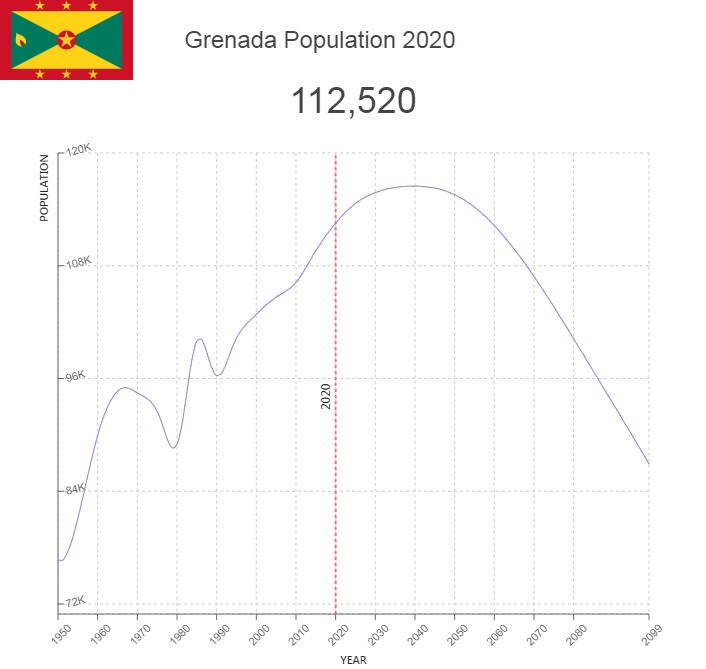 Grenada is known as the “spice island” because of its nutmeg production. The country has managed to repair the damage after Hurricanes Ivan and Emily in 2004 and 2005, but struggles to pay off the loans they incurred during the reconstruction.

In 2013, Grenada’s population was estimated at close to 105,897 (the World Bank), the vast majority of whom live on the main island, also called Grenada. About 5000 live on Carriacou and 600 on Petite Martinique. The population is relatively young, 35% are under 15 and only 3.5% are 65 years and older. Life expectancy is 75 years for women and 70 years for men. The birth rate is approximately 19 per thousand and the death rate of approximately 7 per thousand, but due to emigration, population growth is weak, and at times it has declined.

The majority (82%) of the population is of African origin. The others are mostly of mixed origin. The last of the original Native American residents must have committed collective suicide in 1651.

Grenada is relatively densely populated with approximately 311 per km2. In the capital of St. George’s, there lived approximately 3900 residents in 2001.

Population of Grenada by Year (Historical)

Major Cities in Grenada by Population

53% of the population is Catholic and 14% belong to the Anglican Church. Otherwise there are a number of Protestant churches and a Baha’i center.

The official language is English. Speaking language is Creole based on French and English.