Where is Grenada located on the map? Grenada is an independent nation located in North America. Check out the following images to see location of Grenada on maps. 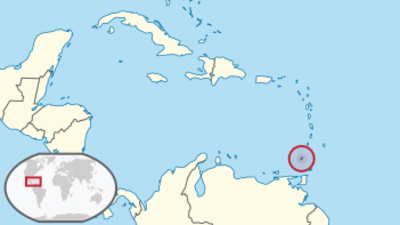 Grenada is an island state in the Caribbean, where it is one of the islands of the Lesser Antilles. You can see where Grenada is on the map. The main island and other islands from the Grenadines group belong to Grenada. The largest of these southern Grenadines (the northern ones belong to St. Vincent and the Grenadines) is Carriacou. St. Vincent and the Grenadines is the northern neighbor, Venezuela the southern, around 200 kilometers away. Grenada is named after the Spanish city of Granada, because the landscape probably reminded the Spanish conquerors of Andalusia.

Grenada’s islands were formed from former volcanoes. That’s why the soil is very fertile and that’s why it’s also quite hilly. Mount Saint Catherine on the main island of Grenada is the highest mountain at 840 meters. Many small rivers flow from the mountains into the sea. There are several old crater lakes in the interior of the country, the largest being the Grand Etang lake. There are many beautiful sandy beaches on the coast. Grenada measures 34 kilometers at its widest point and is 19 kilometers long.

Carriacou is the second largest island. It is surrounded by coral reefs and is shallower with a maximum height of 291 meters. Clouds cannot rain down here and so it is drier than on the main island.

Grenada is warm all year round. Snow is unknown here and nobody needs winter shoes. On average it is 27 degrees. The temperatures fluctuate more on a day than from month to month. Then it is 23 degrees in the morning and 32 degrees in the afternoon (nine degrees difference). The coldest month is January with 26 degrees, the hottest August with 27.4 degrees. Here the fluctuation is less than two degrees.

December to May is the driest. Most of the rain falls between July and October. Then it is also the time of the hurricanes. Grenada is located on the southern edge of the hurricane-hit area in the Caribbean. That is why it is not hit by as many hurricanes as other islands. However, in 2004, Hurricane Ivan caused very severe damage. Many houses have not been rebuilt to this day and the nutmeg harvest is only slowly recovering.