Easter Island, Spanish Isla de Pascua, Polynesian Rapa Nui, island in the southeast Pacific, 3,600 km west of Chile; 163 km2, 7,800 residents (2018). The majority of the population are Polynesians. Easter Island is the easternmost island in Polynesia. It is of volcanic origin and has a subtropical climate. Extensive grasslands provide sheep grazing, but neither livestock farming, farming nor fishing provide enough food for the population. Tourism has become increasingly important as a source of income. The first Europeans on the island were a Dutch expedition that arrived on Easter Day 1722. The island belongs to Chile since 1888, and has been on UNESCO’s World Heritage list since 1995. 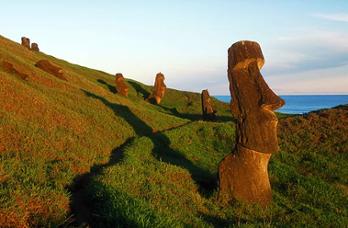 Archaeological data unequivocally show that Easter Island was populated westward by Polynesian seafarers about 400 AD. The Polynesian language spoken by today’s islanders is very old-fashioned, preserved because of the island’s isolated location; it is also the only one that has had its own writing system. Furthermore, the artifacts found in the oldest settlement stores, including stone crosses of very early Polynesian type.

The origin of moai, the famous Easter statues, up to 9.8 m high stone statues, and the stone-built platforms, ahu or marae, on which the statues were erected are unclear. The older view that the tradition was introduced by new immigrants from the West, e.g. from the Marquesas Islands, has no support in the finds. Instead, many point to the fact that the custom of raising stone statues developed locally and from there spread to other parts of Polynesia; modern excavations have shown that the oldest ahu / marae structures on Easter Island were built around 700 AD, while the earliest known ones in the central parts of Polynesia date back to the 15th century AD.

The new archaeological results once again raise the question of early contacts between Easter Island and the contemporary Tiahuanaco culture in Peru, where similar ritual platforms and stone statues were erected. The introduction of sweet potatoes in Oceania puts beyond any doubt that Polynesians have come into contact with South America at some point, although material evidence of such contacts is still lacking.