As of 2019, there are 3 airports throughout the state of District of Columbia according to IATA and ICAO. Through the table below, you can find name of each airport, its abbreviation, city location, and size. Airports in District of Columbia are listed in alphabetical order. Please note that some airports serve internationally, while the other only serve domestically. 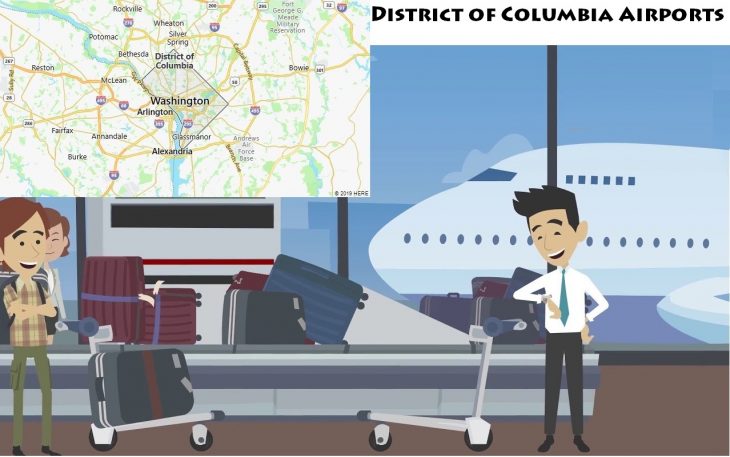 Washington – DC is at the same time, city and federal district,capital of the United States of America. The District of Columbia (District of Columbia) was established in 1790 as the permanent location of the new nation’s capital. It became the seat of the federal government in 1800. The City takes its name from the first US President, George Washington, and the name of the District is a tribute to Christopher Columbus.

Washington DC is at the confluence of the Potomac and Anacostia rivers. It is also the center of a dynamic and cosmopolitan metropolitan region, but with great social inequality. The Washington metropolitan region has an additional 24 counties in the neighboring states of Maryland, Virginia and West Virginia.

The Capitol houses the United States Congress. In the north wing is the Senate and, in the south wing, the House of Representatives. This magnificent neoclassical building, built in marble, was designed in 1792 by William Thornton. Construction began the following year and Congress was installed in 1800, but the building was not completed until the middle of the 19th century. The Supreme Court is on the east side. The site of this architectural complex is known as Capitol Hill.

Washington DC is one of the most popular US tourist destinations. There are a large number of monuments, museums, cultural institutions and commemorative events, in addition to political events.