Where is Bahamas located on the map? Bahamas is an independent nation located in North America. Check out the following images to see location of Bahamas on maps. 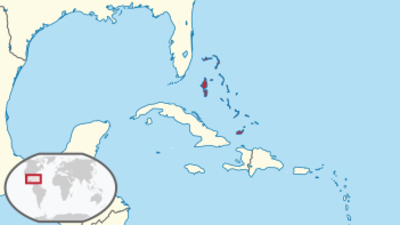 Only 30 islands are inhabited. The island with the most residents is New Providence, on which the capital Nassau is also located. 70 percent of all Bahamas residents live on New Providence. However, it is one of the smaller islands in terms of area! The second largest island in terms of residents is Grand Bahama, where Freeport is also the second largest city, followed by Abaco and Eleuthera by some distance. Andros is the largest island by area, followed by Abaco and Inagua.

All islands are very flat. And so the highest point in the country is only 63 meters high. It is Mount Alvernia on Cat Island (“Cat Island”).

What does the name Bahamas mean?

The Bahamas are in the red circle. The USA with Florida and Cuba are the closest states.

The Bahamas has a tropical climate. The islands are warm all year round. The hottest months are between June and September with average temperatures of 27 degrees. These are also the months with the most rain. Overall, however, it rains little and the sun shines 340 days a year. The coldest month is January, but even then the average temperatures are still 21 degrees. The Bahamas are in the area of ​​influence of the warm Gulf Stream, which means that temperatures rarely drop below 20 degrees.

Nevertheless: the weather is not always heavenly, because the Bahamas are repeatedly hit by tropical cyclones. This is usually the case between July and October. The hurricanes wreak havoc on houses and boats, and sometimes people are killed.