Where is Madagascar located on the map? Madagascar is an independent nation located in Eastern Africa. Check out the following images to see location of Madagascar on maps. 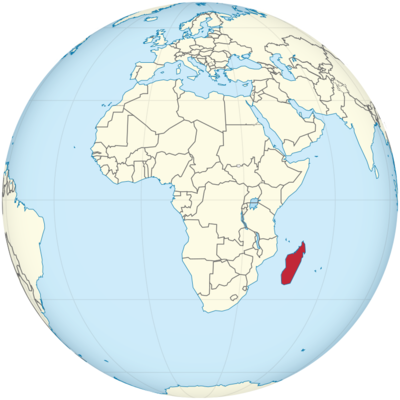 Madagascar runs through a plateau with an average height of 1100 meters. You reach the highest point with the Maromokotro, a 2876 meter high mountain in the north of the country. There are five regions in Madagascar. These are the east coast, the Tsaratanana massif in the north, the central highlands, the west coast and the southwest. The climate differs in the regions. Especially the north of the island is very rugged and there are many bays here.

One often hears the term “red island” for Madagascar. The soils of Madagascar are often red and that’s where the name comes from.

Madagascar is located in the Indian Ocean.

It is 150 or 160 million years ago that Madagascar separated from the African continent. This allowed animals and plants to develop here that cannot be found anywhere else, such as the lemurs.

Conversely, typical African animals are missing in Madagascar because they only developed later, when there was no longer any connection between Africa and Madagascar. Because of this independent development, Madagascar is sometimes even referred to as a separate continent.

Madagascar is located south of the equator in the tropics. It’s hot here all year round. The precipitation decreases from east to southwest. It doesn’t rain that much on the west coast. In the southwest there are real desert landscapes, while on the east coast eight times as much rain can fall. Rainforests thrive in this region.

The temperatures reach a pleasant 25 degrees on average. Since the interior of the country is higher up, it is usually cooler here than in the flat coastal regions. Here you will also find most of Madagascar’s agriculture, especially rice cultivation. November to April is the rainy season in Madagascar. It is cooler in the dry season from May to October.