Where is Lebanon located on the map? Lebanon is an independent nation located in Western Asia. Check out the following images to see location of Lebanon on maps. 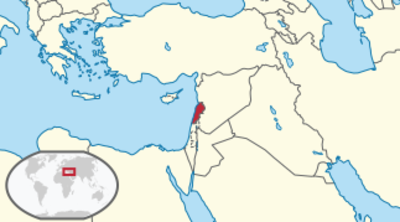 Lebanon is a small country and in terms of area not even half the size of the German state of Hesse. You could pack Lebanon into Switzerland about four times if you wanted to.

The coast of Lebanon stretches over 220 kilometers, the widest part of the country is just 85 kilometers long. Lebanon borders two countries: Israel to the south and Syria to the north and east. Lebanon shares a border of 375 kilometers with Syria. In the northeast, Lebanon is wider than in the south.

On this map you can find the exact location of Lebanon.

Even further to the east are Anti-Lebanon and Mount Hermon. These are also mountains that run from north to south. The border with Syria lies on the ridge of Anti-Lebanon, because Lebanon virtually shares the mountains with Syria. In the south you will find South Lebanon, which is not as high as the mountains, but is still very hilly.

The longest river in Lebanon is called Litani and stretches for about 140 kilometers. By the way, there is no desert in Lebanon, even if many people associate it with Lebanon.

Overall, Lebanon is a fairly mountainous country. In addition to the landscapes, there is also a very special region, that is the country around the capital of Lebanon.

On this map you can see the different cities of Lebanon.

Although the country is not large, it shows a great variety of landscapes. On the coast of the Mediterranean Sea, the land is a flat plain.

Then the Lebanon Mountains follow. The name “Lebanon” is derived from the mountains of the same name, which run through almost the whole country. The mountains run almost parallel to the Mediterranean coast and then become flatter in the south. In Arabic one speaks of Jabal Lubnan and the highest mountain of these mountains is the Karnat as-Sauda with 3088 meters. The famous cedars grow here, which are both the symbol of Lebanon and immortalized in the flag.

The Bekaa Plain lies to the east of the Lebanon Mountains. This is a plateau.

Since the landscapes in Lebanon are very different, the weather also differs depending on the region in which you are currently staying. On the coast we speak of a Mediterranean climate, which means that the summers are hot and very dry and the winters are mild and rainy. The mean temperatures in Beirut, which is located on the coast, range between 28 degrees in July and around 14 degrees in January.

In the interior of Lebanon, however, temperatures rise higher in summer and fall again in winter. It rains a lot on the slopes of the Lebanon Mountains, because the clouds move from the west to the mountains and rain down there. Here precipitation falls up to 1500 millimeters per year. It rains most in the winter months. By the way, it can snow in Lebanon and that’s why you could go skiing in Lebanon. In the Bekaa plain it rains much less, about a third of the amount that falls in the mountains.